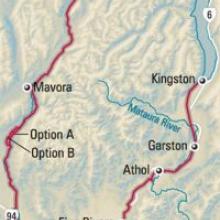 The Southland District Council will spend up to $7 million if it is given approval to build a 184km cycle track running from Nicholas Station to Kingston.

A resource consent application for the Around the Mountain cycle trail has been made to the Department of Conservation, Environment Southland, Queenstown Lakes District Council and the Southland District Council.

Provided consent is given, construction could be under way as early as mid-August.

Questions about tendering will be addressed this month.

The Southland District Council's senior policy analyst, Wayne Heerdegen, said there was cautious optimism the plan would be approved by his own council next week.

"We still have to obey our own rules," he said.

"So we are getting an independent commissioner to have a look at the paper work."

The cost of the 120km leg of the track running from Walter Peak to Lumsden would be at least $4 million.

Mike Barnett, Southland District Council's project manager for the Around the Mountain trail, said work was more likely to begin by early December.

He hoped to see 90% of the track finished by March next year.

Construction of the track will include the building of nine toilets, three shelters, a car park and 41 bridges. This will add more to the total cost.

The track will begin at Walter Peak, run past the Mavora Lakes and, upon reaching Lumsden, will follow State Highway 6 to Kingston.

Cyclists can take a night's rest at any one of the townships of Mavora, Mossburn, Lumsden, Five Rivers, Athol or Garsten before finally reaching Kingston.

There they can either turn back and do it all again, or take a shuttle bus.

Mr Barnett said he was interested in linking up with whoever bought the Kingston Flyer, to add a different dimension to the cyclists' travel.

"They will come to us, hopefully, once it is all sorted out."

The track had been planned for five years.

It will be built as a moderate-level exercise and recreation track.

Once complete, it will take four or five days to ride.

Mr Barnett said cyclists could continue on to the Queenstown trail from the Walter Peak end by taking the boat.

He said the track targeted the same customers as those who enjoyed the 150km Otago Central Rail Trail.