Voice and co-founder of Supertramp, Roger Hodgson, at The Rees Hotel in Queenstown today ahead of his gig at the Gibbston Valley Winery on Saturday. Photo: Joshua Walton
Queenstown has already left a lasting impression on Roger Hodgson, voice and co-founder of pop-rock sensation Supertramp, after he arrived in the resort for the first time yesterday ahead of his headline show at the Gibbston Valley Winery on Saturday.

The world-famous singer/songwriter flew into town to be greeted by Queenstown's mayor Jim Boult and the pair instantly clicked, Hodgson said.

"I came from Florida on a 32-hour flight, so it felt like when I landed, this was the reward. 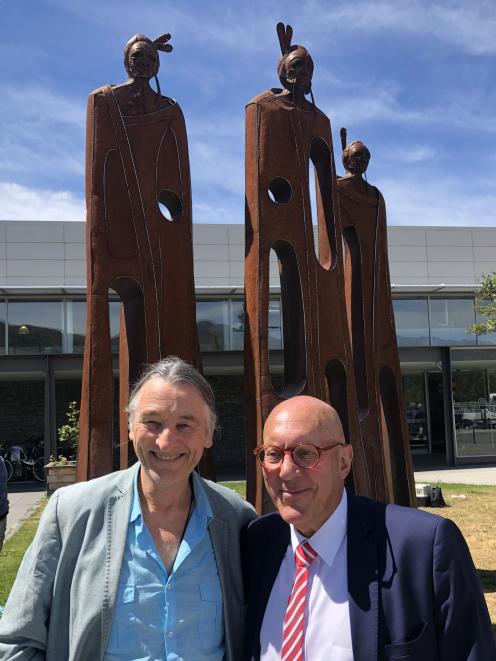 Queenstown's mayor Jim Boult greets Supertramp's Roger Hodgson at Queenstown Airport yesterday Photo: Supplied
"I know that this is one of the most beautiful places on earth and this proves it - it's just unbelievable.

"I hope the New Zealand population keeps it that way.''

The 68-year-old said he was amazed by the resort's landscape and diversity and hoped to take a trip up a nearby mountain and possibly ride on the Skyline Gondola to check out the picturesque views of the town from above.

He was even approached by a fan who saw him live in the 1980s as he took a stroll along the Frankton Arm to admire Lake Wakatipu this morning.

He will headline the Gibbston Valley Winery Summer Concert, the first of three shows to be held as part of a tour across the country.

His only other visit to New Zealand was in 2010 for his solo tour of the country.

Hodgson would be performing fan-favourites at the show, such as Give a Little Bit, The Logical Song and Breakfast in America.

"I'm very fortunate to have written songs that have lasted so long,'' he said.

"They become part of who I am. I feel very blessed.''

Tickets for the concert are still available.