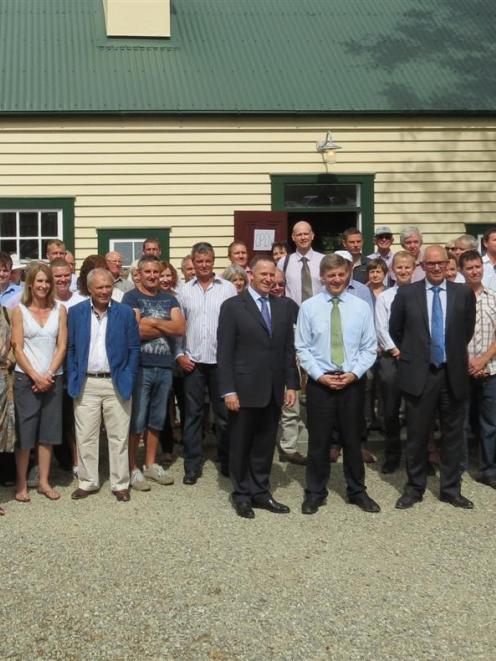 Preservation society members, tradespeople, trust representatives and guests, including Prime Minister John Key and Clutha-Southland MP Bill English, pose after the official reopening of the boat shed and shipping office at Frankton Marina on Friday, for a photograph for future guardians of the historical complex to treasure. Photo by James Beech.
Lake Wakatipu's rich maritime heritage is preserved for future generations after the official opening of the historic boat shed and shipping office by Prime Minister John Key at Frankton Marina on Friday.

More than 70 guests attended the occasion which marked the rescue and restoration of the landmarks by the dedicated volunteers of the Wakatipu Community Maritime Preservation Society after 12 years and $800,000.

the buildings would never be finished, let alone opened by the Prime Minister.

Mr Butson thanked representatives of the 10 funders who trusted society members to do the job.

He expressed his gratitudeto the tradespeople and suppliers who made the redevelopment possible.

The chairman described the restoration of the building as a chimera, a mythical creature with a variety of animal body parts, due to the variety of materials and building styles which had to be dealt with, as the society followed the conservation principle of repair rather than renew.

Mr Key told the audience ''We are what we were in the past'' and attributed the effort to preserve a bygone era, which ''could easily have been lost to the wrecker's yard''.

The Prime Minister, who is also Minister of Tourism, applauded the ''great ingenuity'' of turning the shed and office into a place people wanted to visit, with the addition of a cafe and bistro.

''One of the great things about Queenstown is not just the natural beauty, it's the history of the place ... that's just magnificent,'' Mr Key said.