Plenty of support for brief appearances

Nine Wakatipu Rugby Club players received the loudest cheer of the day at the Queenstown International Marathon as they crossed the line in their Speedos.

The runners braved soggy conditions to complete the 21.1km half-marathon course bare-chested, in about 2hr 16min.

Ellis said they had "heaps" of support along the way on the course.

"Lots of mates on the sidelines and people who loved the attire, I think." 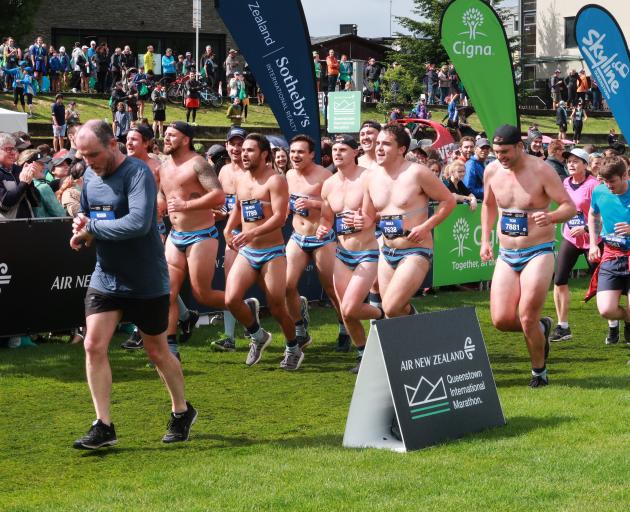 They were among about 12,000 runners who took on the various distances.

Several 5-year-olds were among the 321 children who ran the 5km, while the oldest competitor was 88-year-old Clasina Van der veeken.

Television personality Matt Chisholm was another to enjoy the day, as he walked the half-marathon with Alice Chambers-Smith.

Their friendship came about through a cheeky social media message from Ms Chambers-Smith as she looks to raise money and awareness for the Malaghan Institute of Medical Research.

The 36-year-old mother of two has brain cancer, has survived several operations, and is fighting her illness to see her children grow up.

Chisholm, who is about to move to Central Otago, was using the event to highlight his own battle with depression and to encourage others to get out and enjoy their surroundings.

"That is one of the better days of the year. I had an absolute ball.

"Running with Alice, who has had some struggles recently, we just talked for three and a-half hours, had a few laughs and lots of interaction with other competitors. It was an absolute ball.

"This is a bloody delicious part of the world, just gorgeous. Even though I have driven around here a thousand times, I have never run around here, and you see different things.

"I can see why they say it is one of the most beautiful marathons to do - it is just so picturesque. Every corner, Alice would take another photo."

Nearly two-thirds of the competitors were female (61%) and 70% of entries were from outside the region. Runners came from across New Zealand and 43 other countries.