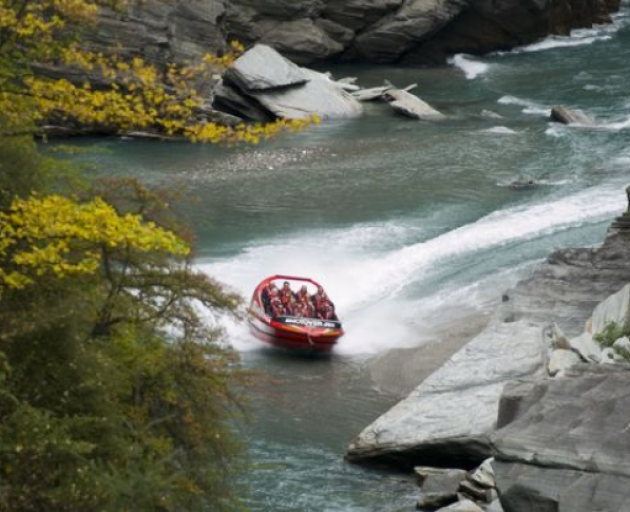 File photo: Destination Queenstown
Passengers on a jetboat ride operated by Shotover Jet Queenstown on 2 January, between 9am and midday, need to isolate until they return a negative test result, the Ministry of Health said.

It confirmed that the passengers are regarded as close contacts of the positive case.

The news comes after the list of locations was updated at 10am today to include Shotover Jet Queenstown, in Arthurs Point Rd, between 9am and noon on January 2.

Yesterday the ministry's website listed SkyCity Casino in Beach St as a location of interest on January 1 between 5.50pm and 7.30pm.

It also lists Oaks Club Suites in Frankton Rd as a location of interest between 9.30pm on December 30 and 8.30am on January 2.

Anyone at these locations during those times was asked to self-monitor for Covid-19 symptoms for 10 days after they were exposed.

If symptoms developed, people should get a test and stay at home until they got a negative test result.

Queenstown Lakes Mayor Jim Boult last night said he had a "very good understanding" with the Southern District Health Board that it would notify him if there were serious concerns about a possible Covid case in the district.

That had not happened, so he assumed the locations of interest were not being treated as high risk.

"However, anything like this is of concern," he said.

He believed the district was as prepared as it could be for a potential outbreak, and he urged people to follow precautions such as wearing a mask and maintaining good personal hygiene.

The ministry yesterday said there were 85 new community cases of Covid-19 picked up over the weekend: 57 in Auckland, seven in Waikato, one in Taranaki, 16 in Bay of Plenty, two in Lakes and two in Wellington.

There were 31 people in hospital, including two in ICU. The average age of those in hospital was 58.

There were also 64 new cases identified at the border over the past two days. Most of those cases were expected to be the Omicron variant but the ministry did not provide details.