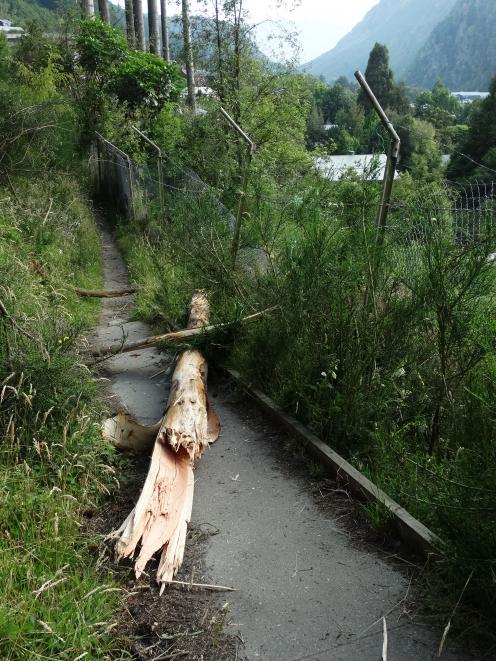 The gondola remained operational yesterday, while the birdlife park was closed until about noon as the site was secured, and the boundary fence repaired.

The logging contractor notified WorkSafe after being alerted to the incident about 7.30am.

Skyline is clearing Douglas firs near the gondola — the first visible sign of its multimillion-dollar upgrade of the upper and lower terminals, and the gondola itself.

‘‘When it [work] starts up again will depend on what the investigation decides,’’ he said.

In a statement, Skyline Queenstown general manager Wayne Rose said it was unclear what time the incident happened, or ‘‘how the tree came down’’.

“Our first priorities are to understand where the tree came from and to understand if there is a risk with any other logs that are on site as part of the forestry work.

“Our forestry contractor is currently on site conducting an assessment and they will be co-operating fully with WorkSafe.”

No-one was injured and wildlife, enclosures and other buildings at the park were unharmed.

However, a member of the public who called the
Otago Daily Times about the incident said ‘‘it could have killed someone’’.

The person, who did not want to be named, said the tree had gone through the park fence and ‘‘made a hell of a mess’’.

Mr Douglas said the logging contractor moved around the site, ‘‘depending on circumstance’’.

‘‘At the moment the trees are being felled to create space so that the slope stabilisation crew can do their work, so, it’s a multi-faceted sort of operation.’’

He was thankful no-one was injured.

‘‘Any outcome that doesn’t damage people is a good outcome,’’ he said.