Officials are working to remove Covid-19 vaccine passports and narrow the need for vaccination mandates, Prime Minister Jacinda Ardern says as she tries to woo international visitors back to the country.

Ardern and Tourism Minister Stuart Nash are speaking to media in Queenstown.

The visit comes as the Government seeks to get New Zealand back on the international tourism agenda after announcing borders would reopen to tourists from April 12.

Ardern said there were was more work they could do on working holiday visas, too.

Traditionally New Zealand had not had to market this as an option, but the Government was looking to work with Tourism NZ to promote for working holidaymakers.

On mandates and vaccine passes, Ardern said they were looking to where the Omicron peak would be. Auckland was currently plateauing, and modelling for the rest of the country showed it happening at the end of March. 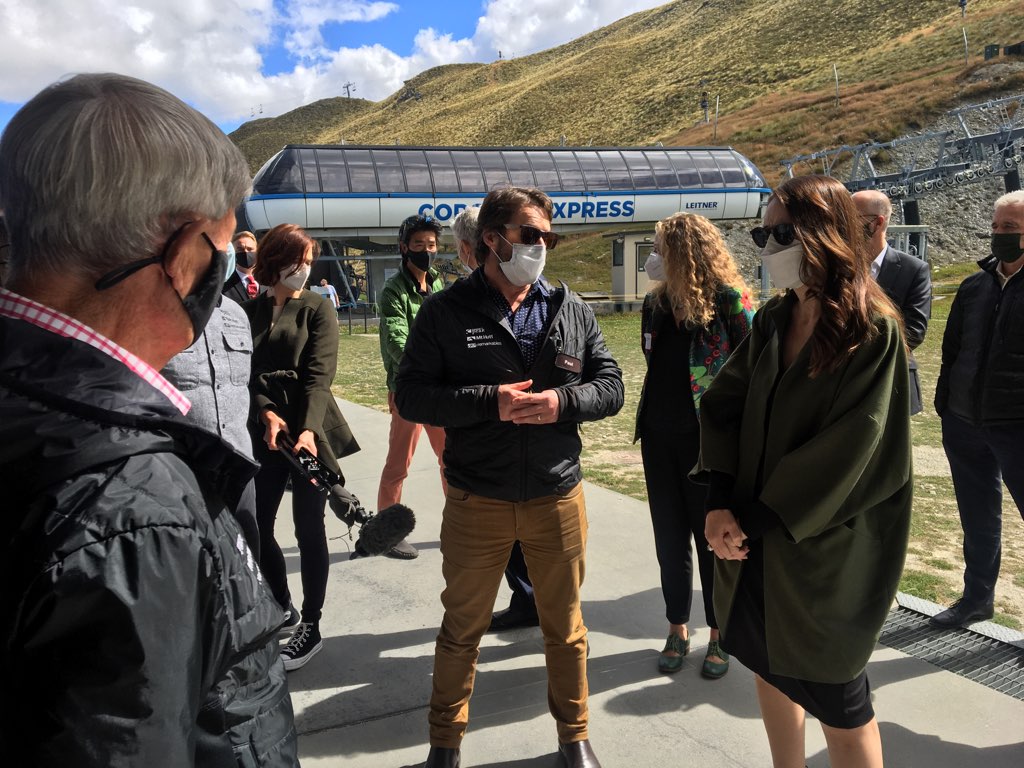 Prime Minister Jacinda Ardern (r) speaks to NZSki chief executive Paul Anderson at Coronet Peak today. Photo: Tracey Roxburgh
On the wider traffic light system, Ardern said this was the first wave and there needed to be a protection system ready in case it was needed.

Ardern said the point of the system was so people could go about their everyday lives as safe as possible.

QR codes, passes, mandates were being reviewed, she reiterated.

Ardern this morning did a promo interview on the Australian breakfast show Sunrise.

"I cannot remember a time when we have been so excited about the prospect of seeing as many Australians as possible come and visit us," Ardern told Sunrise, speaking from tourist hotspot Queenstown.

"You can expect to get the warmest possible welcome you can imagine."

The border was originally scheduled to reopen to tourists at the latest by July, but the Government brought forward the schedule as the country moves through the Omicron peak.

Those crossing the Tasman can arrive from 11.59pm April 12, while people from other visa waiver countries - including the United States and United Kingdom - can enter from May 2.

Self-isolation rules have also been dropped recently reflecting the shift in risk profile from international arrivals, who now only have to return a negative pre-departure test and do rapid antigen tests on days 1 and 5 once in New Zealand.

"You can expect to get the warmest reaction you can imagine"

New Zealand Prime Minister @JacindaArdern says Kiwis are "so excited" to welcome tourists back from next month after two years mostly shut off from the world. pic.twitter.com/EvBuyAWfC0

Ardern said the outbreak was now "stabilising" allowing them to set the April 12 date to give the industry some warning.

Ardern said the border announcement had been met here with "a sense of relief, anticipation, excitement and joy".

Tourism was "hugely important" to the economy, Ardern said.

The once nearly-$42 billion industry had been decimated after the borders were shut due to the pandemic, with thousands of jobs lost.

The border reopening for tourists has been welcomed by tourism operators and the wider industry.

It has also been accompanied by a $49m tourism kick-start fund to help businesses in hardest-hit regions, including Fiordland, Queenstown, Wanaka, Kaikōura, Westland and the Mackenzie District.

While Queenstown was popular domestically Australia was a "very important market", Ardern said. 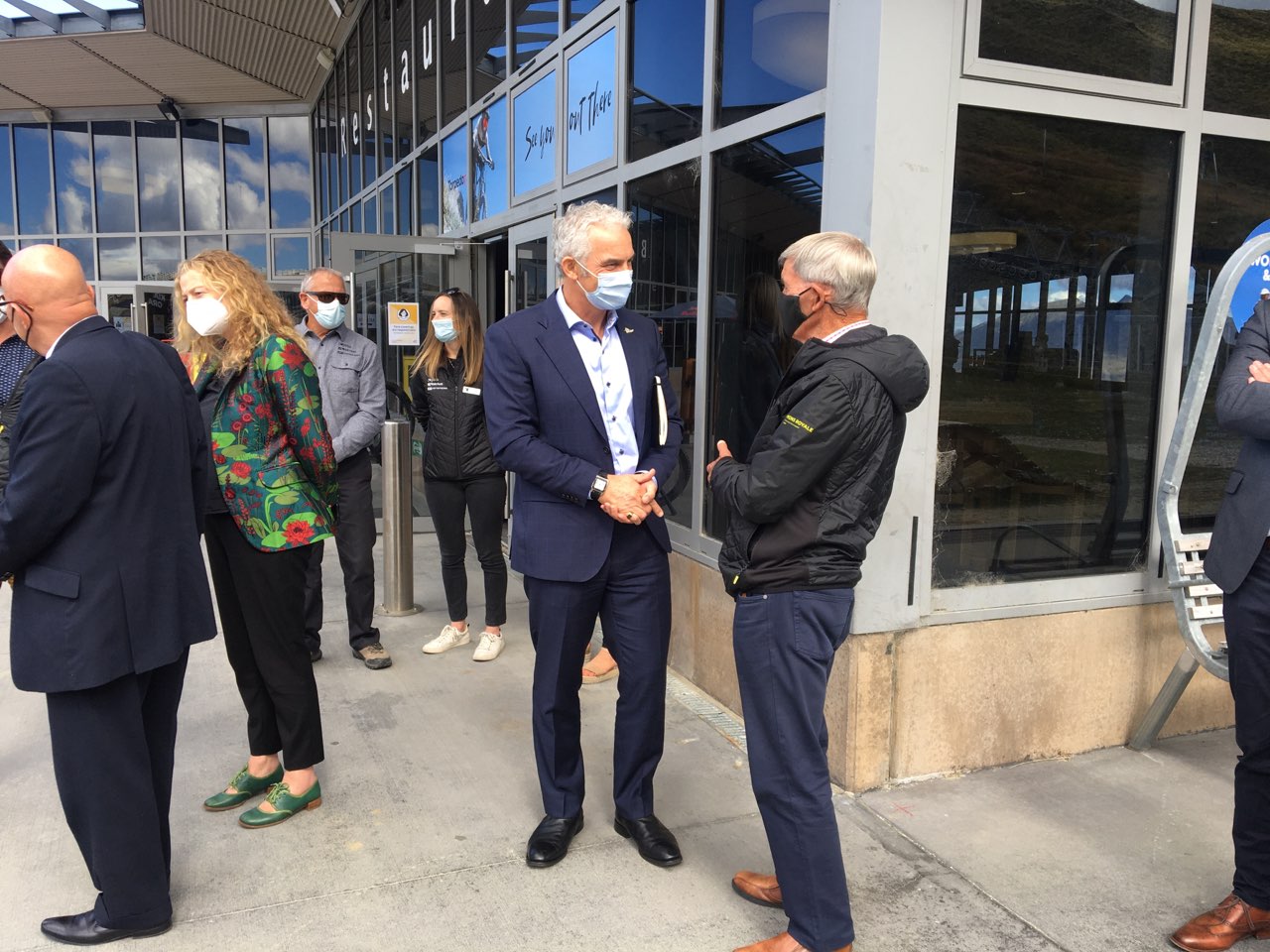 Tourism Minister Stuart Nash (L) and Sir John Davies. Photo: Tracey Roxburgh
About 40 per cent of tourists across the country came from Australia, she said.

But, as with Australia, tourism was about more than just money, she said.

"For us, it is about a step towards more normality. So much of who we are as a nation is defined by our tourism because we pride ourselves on welcoming people, showing off our country with amazing hospitality.

"To not have been able to do that has been a real blow for us for two years... We are elated."

Asked about any scenarios where border movements could be tightened again and managed isolation and quarantine introduced, Ardern said it would be similar worldwide.

"Covid is here. It is vastly different than those periods before when we were trying to operate that [transtasman] bubble while trying to keep Covid out.

"We are in vastly different places. We are both highly vaccinated, both have Covid here and are managing as the rest of the world is.

"The only thing I think anyone could say could cause disruption at the border in the future would be another variant, highly dangerous, where vaccines don't work.

"To be frank, that would cause the whole world to think differently."

Ardern said tourists could now "plan with certainty" to travel to New Zealand.