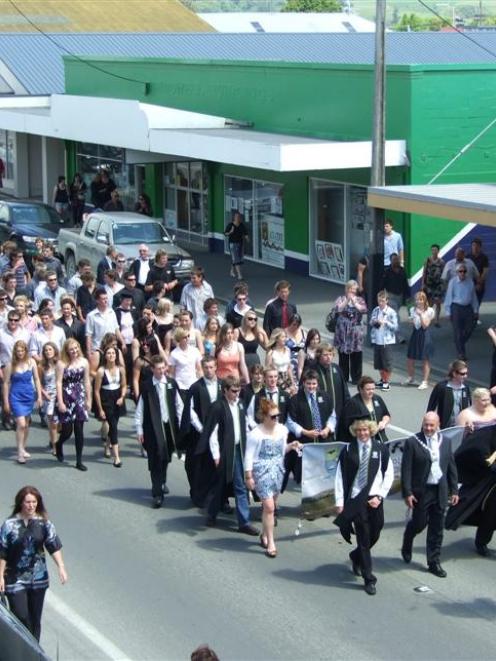 It was the first time Telford students had been in a graduation parade, and the route was lined by proud parents and well-wishers.

Telford spokeswoman Lisa Snell said Telford staff had taken note of what happened at other tertiary institutions and decided to try it.

"It was awesome. People came out of shops, and there were parents lined up clapping."

Graduates followed a piper up Clyde St to the Memorial Hall, where chief executive Jonathan Walmisley welcomed them and congratulated them on their success.

Telford council chairman David Yardley spoke about the approaching merger with Lincoln University, saying the decision to merge the two institutions had not been an easy one.

Lincoln had a long and proud history of farming stretching back 100 years, and had established successful working relationships with various organisations.

Telford had a proud 40-year history, and had dedicated itself to teaching best farming practice and animal husbandry.

Clutha-Southland MP Bill English spoke about the decline of the New Zealand export sector, and the important role Telford students played in the country's economic recovery.

"Telford students have the best opportunities anyone in the industry has faced for 30 or 40 years. Also, with an ageing population, the workforce will shrink in the next 20 years."

This meant there were more opportunities available to the graduates, who were limited only by what they were willing to challenge themselves with, he said.