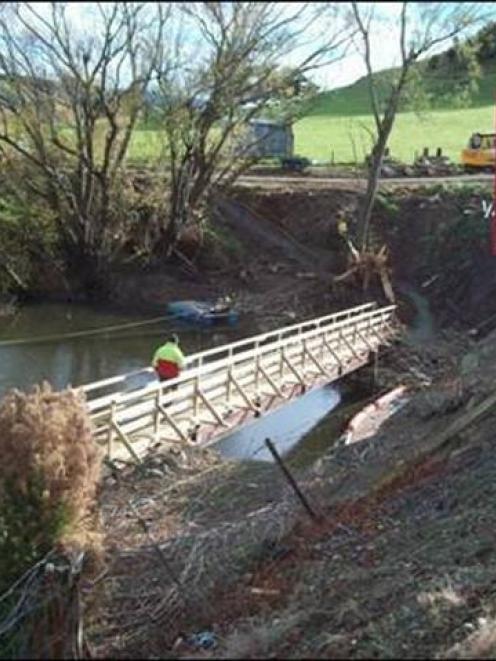 A lack of finance and no clear timeframe for when the Tuapeka River Gold Trail project would be operational prompted the decision by the district assets committee last week.

The bridge has been at the centre of a tug-of-war between the Lawrence Tuapeka Community Board and the Tuapeka River Gold Trail working party.

The community board wanted to use the bridge in a Gabriels Gully walking track upgrade for next year's 150th gold celebrations, while the Tuapeka trail working party wanted to incorporate the bridge into a proposed cycle track.

Both groups made submissions during the public forum of last Thursday's committee meeting.

Community board chairman Geoff Davidson and deputy chairman Roger Cotton explained the intended use of the bridge and addressed an argument that it held special historical significance for Tuapeka Mouth.

Mr Cotton told the committee the gold rush was of historic significance to all New Zealanders, and the use of the bridge would be an important part of the Gabriel's Gully Goldrush 150th celebrations next year.

"If there was ever a heritage trail in New Zealand, it's this one."

The Tuapeka trail working party spokesman Roger Hodgkinson said the bridge was 100 years old and an integral part of Tuapeka Mouth's history, which should not be removed from the area.

A letter from Historic Places Trust Otago-Southland area manager Owen Graham said while some of the components of the bridge were 100 years old, its historic significance "was not high, and is therefore not a major consideration in determining its future re-use".

Mr Cotton said the community board hoped the bridge would be in place before the 150th celebrations, but that would depend on resource consent from the Otago Regional Council. Volunteer labour would be used to maintain the structure.

If the community board could not use the bridge, the cost of building a new structure would be prohibitive, Mr Cotton said.

Mr Hodgkinson estimated it would be 18 to 24 months before he was ready to use the bridge. He acknowledged he did not have funding for his project and would need further funding to give the bridge the immediate rust protection work it required.

The committee members decided there was a more immediate use for the bridge in Gabriel's Gully, with time to explore other options for the Tuapeka trail and recommended it be moved to the gully.

The council will make a final decision at its meeting on September 16.