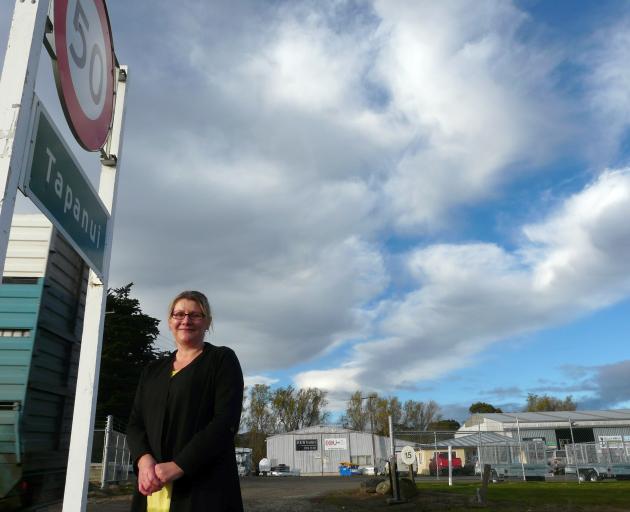 South West Autos Tapanui owner Racheal Hines wants the NZTA to move 50kmh signs further out of town to improve safety near her business. Photo: Richard Davison
Tapanui business owners have described the southern entrance to the town as a speed ‘‘deathtrap’’ that needs to be fixed.

Last winter, South West Autos owners Racheal and Geoff Hines contacted the NZ Transport Agency to raise concerns about the 50kmh advisory sign opposite the exit from their yard.

The exit sits at the top of a blind summit on State Highway 90, entering the town from Gore.

‘‘We moved the business here in 2017, and immediately noticed traffic was only just beginning to slow down from 100kmh when they were right on top of the 50kmh sign. That meant customers entering or leaving the yard, and Ritchies buses that also use the yard, were taking their lives in their hands every time.

‘‘Then, since we made the request for NZTA to look at moving the sign, there’s been a new residential subdivision go in, and we’ve also developed plans for a new business right across the road, so it’s a deathtrap in waiting.’’

Mr Hines said the issue could be solved simply by moving the sign about 200m further south, to the base of the hill.

‘‘We’ve been in limbo with our business associate for at least 12 months now. It’s holding up opportunities for this town and needlessly endangering lives in the meantime.’’

He said he had seen ‘‘multiple’’ near misses outside his business.

‘‘Essentially [NZTA] doesn’t know what it’s doing, and is just fobbing us off. We’ve written several letters and have got zero traction.’’

The issue was also raised during the most recent West Otago Community Board meeting, where deputy chairwoman Sue Wink decried the ‘‘lack of action’’ from the NZTA.

‘‘The board, the mayor and the police are all of the same opinion here. Surely, it’s a simple matter to find a way forward?’’

Board chairwoman Barbara Hanna said she had written this week to the ‘‘South Island executive’’ in order to escalate the request.

NZTA principal safety engineer Roy Johnston told the Clutha Leader any change could take till December next year to implement. ‘‘Nationally, NZTA has identified the top 10% of crash risk areas and has developed a programme for speed management across the country.

‘‘Otago is planned for investigation and implementation in the next 18 months. State Highway 90, including Tapanui, has been identified as a potential site for speed management . . .’’ Mr Johnston said.

There had been four minor crashes on the stretch of road since 2014, although at this stage there was ‘‘no evidence’’ the sign’s position was creating a greater risk than at other town boundaries, Mr Johnston said.

However, the sign in question could receive priority attention as the NZTA was aware of local concerns.

‘‘The agency has requested a technical review of the section of road in question and, once this is completed, will consider whether we accelerate [a] review,’’ Mr Johnston said.