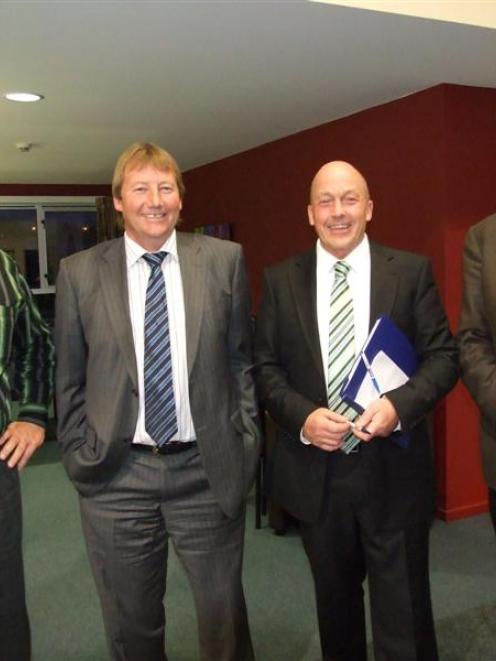 About 70 people attended the forum, jointly hosted by the Otago Daily Times and the Otago Chamber of Commerce, where incumbent Juno Hayes, deputy mayor Hamish Anderson, Bryan Cadogan and Barry Keith began with a three-minute explanation of why they were standing.

After answering set questions on the three key issues they would be campaigning on, candidates answered questions from the floor.

One of the questioners asked if candidates regarded the current rate levels to be unacceptable, and what they would do to lower them.

Mr Cadogan answered first, saying they were unacceptably high and needed to be pulled back.

"I'm not saying I would reduce rates, I would tie them to the rate of inflation."

Mr Hayes said the rates were set by the services the public demanded.

If they wanted lower rates, they needed to decide what they did not want to pay for.

Mr Keith asked how often the Clutha district actually used the assets it payed for, pointing out the forum was held at the Town and Country Club instead of at the Town Hall.

His solution was to attract other people to the district to use to use the facilities, and charge them a fee.

Mr Anderson said you could not tie the rates to the rate of inflation because council expenditure differed to the Consumer Price Index, and the two did not relate.

His final comment was, if elected, he would "educate ratepayers" so they realised their rates were actually a "good investment".

People had to analyse what they got for their rates, because "rates are good value when you get down and analyse them," he said.

Three of the four candidates believed the Clutha population was declining, and lifting population would reduce rates.

Other questions included: has the council changed its attitude to businesses that pollute the Clutha River?, what are the biggest challenges the district faces?, and what do candidates intend to do about them?.

If elected, how would candidates rate their terms as `successful'?, how were candidates going to protect main street businesses if traffic flows change on the main street?, the declining sheep population is impacting on the length of the freezing works season - what were candidates going to do about it?, how they intend to unify the council to make changes?, how candidates saw the role of mayor, chief executive and council staff working together?, what they thought the council's role in attracting business was? and why only one of the three candidates was standing for both the mayoralty and council?.