By Richard Davison
1 Comment
A last-ditch effort to prevent the demolition of Balclutha’s memorial hall is a "kick in the teeth" for the volunteer group driving the project, officials say.

In the letter, the Carters say demolishing the hall, which was built in part using local volunteer labour and materials, would disrespect the servicemen the hall memorialises, their relatives, and those who helped build it.

However, Clutha Mayor Bryan Cadogan reacted to news of the letter yesterday by describing the Carters and their allies as a "splinter group", whose actions could place the $15million project and its 50% government funding in jeopardy.

Public consultation on options for the hall began in 2016, at which time establishing a new "community hub" was identified by ratepayers as a priority for the district. 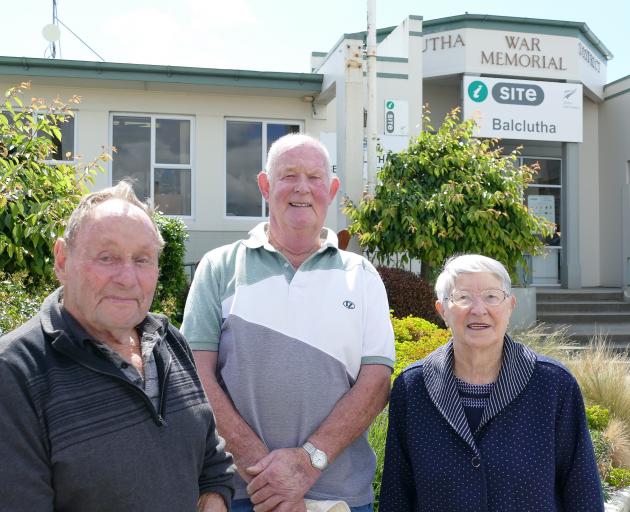 Balclutha residents (from left) Garth Carter, Jack Hoekstra and Barbara Carter say they are among many Clutha ratepayers who still want Balclutha’s war memorial hall refurbished, rather than replaced, as planned. PHOTO: RICHARD DAVISON
The ensuing process — led by council-backed group the Clutha Community Hub Charitable Trust — culminated with an announcement this May the hall would be replaced with a new complex, funded 50:50 by ratepayers and a $7.5million Provincial Growth Fund "shovel-ready" grant.

Demolition of the hall is expected to begin early next year.

The Carters, and friend and former business partner Jack Hoekstra, said yesterday they believed a majority of ratepayers still favoured a less expensive refurbishment of the existing structure.

The survey was commissioned by former hub trust chairman Kevin Barron, who was removed from the project by the council following a disagreement, in May 2018.

"The survey shows 76% of people want to keep the current hall, which as a whole stands as a memorial to the 35 servicemen who sacrificed their lives in conflict.

"Only 19% want it demolished. Just about everyone you speak to says the same thing: save the hall, look after it properly, and save the ratepayers some money. We can’t understand why council has gone down this path," Mr Carter said.

Clutha Mayor Bryan Cadogan said changing course on the project at such a late stage would be "an abomination".

"Having such a key facility as the hall fail its earthquake standards left council in the invidious position of requiring more than $5million just for the strengthening work , and this is a point that has been lost on many people.

"To date [the hub trust] has spent over 10,000 volunteer hours to consider all alternatives.

"I fear [this is] a kick in the teeth, so I steadfastly support the proposals for the new facility and cannot fully express my disdain at what is being suggested."

Mr Cadogan acknowledged a "variance in opinions" existed, but believed most people were in favour of a new facility.

"I hope that at this critical juncture the people of the Clutha district make their voices heard, because it would be an absolute abomination if, after all the endeavours to date, a splinter group could delay proceedings and place the shovel-ready grant in jeopardy."

It would seem yet again that councils don't like to listen to those who elected them, another vanity project??