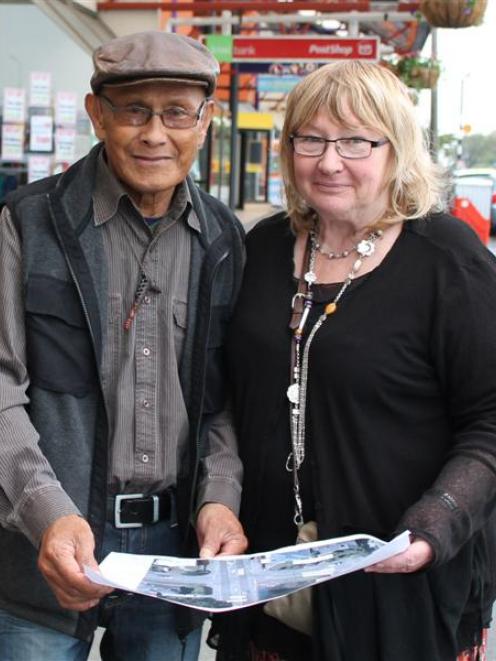 Johnny Penisula and Robyn Hickman study the map showing the South Invercargill location for the winning artwork. Photo by Allison Rudd.
The organisers of a competition to produce a significant contemporary public sculpture for South Invercargill are expecting the $100,000 prize will attract national and international entries.

The South Alive urban rejuvenation group launched the competition on Tuesday and is calling for design submissions by May 23.

Up to three finalists will be awarded $2000 to further refine their concepts, with the winner announced in August.

The money, donated by a benefactor associated with South Invercargill who wishes to remain anonymous, will be used to build and install the work at the Elles Rd/Dalrymple St corner of the Russell Square reserve, near the South Invercargill shopping centre.

Mr Beck said the competition was an exciting opportunity for any sculptor and the $100,000 budget should ensure the creation and production of an important piece of work.

''It's a significant amount of money, so sculptors can put a lot of thought into it and produce something worthwhile.''

He anticipated much interest from local, national and possibly even international sculptors.

Samoan-born Mr Penisula, who has lived in South Invercargill since 1962, said the area was in need of more public sculpture.

''This is something which has been on my mind for a long, long time ... It's a dream come true.''

South Alive incoming chairwoman Robyn Hickman said $116,000 had been donated by the same patron to make the competition happen, including a $10,000 grant for administration.

She thanked the benefactor and said she expected the installed artwork would ''bring more than $116,000 worth of feel-good factor'' to South Invercargill.

The competition brief is available at www.southalivesculpture.com