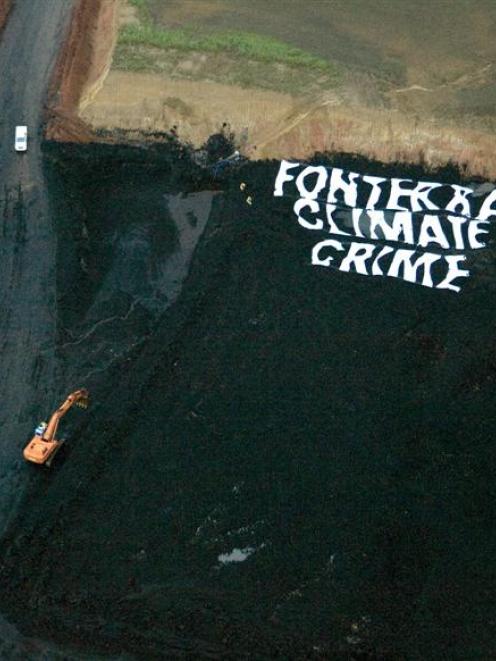 Greenpeace, at dawn yesterday, shut down a pit of a southern lignite coal mine near Gore. The pit is used by Fonterra to help fuel operations at its nearby Edendale dairy factory. Activists unfurled a massive 40m x 40m banner on the ground of the opencast mine. Photo supplied.
Fonterra has accused Greenpeace of selective use of facts, after four activists were arrested during a coal mine protest near Gore.

The three females and a male were apprehended at the New Vale coal mine near Waimumu, about 6.30am yesterday. They have been charged with trespass and given police bail to appear in the Invercargill District Court in the next week.

A dozen police from Gore and Invercargill attended the incident, with those arrested from Dunedin, Christchurch and Waikato.

They were protesting Fonterra's use of coal to run its Edendale factory, but the company's manager of sustainable production, John Hutchings, said the plant operated a co-generation system, which actually saved energy.

Coal was used to evaporate water off the milk to produce powder, and the steam generated by that process supplied 25% of the factory's electricity needs.

Mr Hutchings said improved energy efficiency had resulted in Fonterra's coal use dropping by the equivalent of 34%, or 300,000 tonnes a year, since 1990, similar to the energy used by 100,000 households.

Greenpeace climate change leader Simon Boxer labelled Fonterra New Zealand's largest greenhouse gas producer, for its industrial and farm emissions and for promoting deforestation in Asia for the growing of palm kernel, a by-product of which is used as stock feed.

He was unrepentant about the protest, despite police criticism it tied up 12 police, saying such concerns "were not an argument", that the issue of climate change and an international conference on the subject in Copenhagen next month was of far greater importance to the country.

Inspector Olaf Jensen, of Invercargill, said police were aware something was going to happen, but did not know the nature of the protest, so had to be prepared for any scenario.

"That was 12 officers taken away from other duties, for something that was obviously going to be unlawful."

By the time police arrived, several banners had been erected and some people were tied to equipment that appeared to have been brought along for the task, Insp Jensen said.

The four were part of a group of about 10 people. The others had not committed any offences when police arrived, so were not arrested.