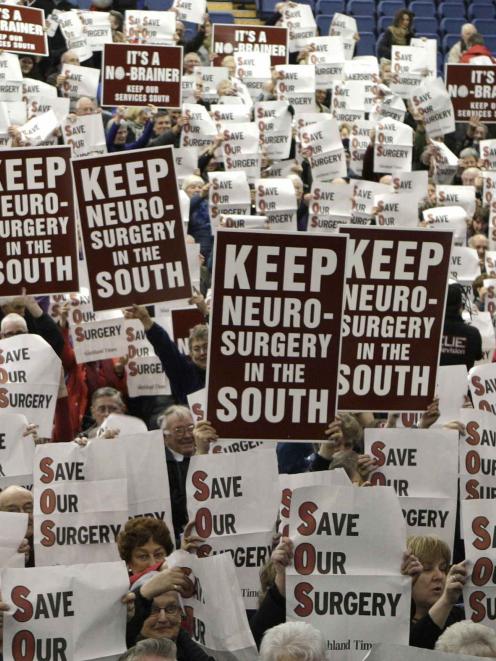 A portion of the crowd at the Save Our Surgery neurological meeting in Invercargill yesterday make their feelings known.Photo by The Southland Times.
There has been little to laugh about in the neurosurgery debate, but expert panel member Glenn McCulloch raised smiles at meeting of about 1000 people in Invercargill yesterday when he referred to himself as "an ignorant Australian".

Mr McCulloch, an Adelaide neurosurgeon, was answering a question about how long it would take for someone injured on the Routeburn Track to get to Christchurch, rather than Dunedin, for treatment.

Mr McCulloch said "you hardly need me to answer that".

The panel knew it was going to take an extra one and a-half hours from such areas: "you only need to look at a map and even an ignorant Australian can work that out".

The panel - Mr McCulloch, chairwoman Auckland paediatric surgeon Anne Kolbe (also originally from Australia) and consumer advocate David Russell - has been convened to advise the Director-general of Health on the future of neurosurgery services in the South Island.

Mrs Kolbe told the meeting the panel's hope was that it would come up with a proposal which would give enhanced cover on what people in the South Island already had with a sustainable solution.

To do that, the panel needed people's constructive input.

Nobody wished to revisit the issue in the next 10 or 15 years, she said.

South Island district health board representatives have been unable to reach consensus on the future configuration of the service, with Southern wanting a two-site service and the other boards' supporting Canterbury's proposal to have all six neurosurgeons working in Christchurch.

Meeting chairman Southland Times editor Fred Tulett pointed out that some of the former neurosurgery patients who spoke at the meeting "would not be here" if the service was situated in Christchurch.

Southern District Health Board member Richard Thomson, one of the organisers of the Keep Neurosurgery in Dunedin Facebook site, said Southland people travelling to Dunedin for medical treatment usually knew somebody in Dunedin, but that did not apply in Christchurch.

He pointed out he was born in Invercargill and his mother was in the front row "waving a banner and looking like a radical".

Mr McCulloch said in his more than 40 years' clinical experience as a neurosurgeon he was "absolutely convinced" patients recovered much more rapidly and to a better level of function if they had family around them.

Drawing the hour and a-half meeting to a close, Grey Power Southland president Geoff Piercy asked for a seconder to a resolution that the meeting "strongly supports the retention of a major neurosurgery unit at Dunedin", prompting many to rise to their feet.

Before the panel arrived, southern civic leaders spoke to the crowd, with Invercargill Mayor Tim Shadbolt's speech including reference to the importance to the southern economy of the University of Otago, which he said was worth $1.8 billion a year.