Booms are in place to contain an oil slick following a fire on a boat in Milford Sound after an ex-fishing boat went on fire and partially sank this morning.

Mr Cleaver said there is now evidence of small amounts of diesel, oil or other contaminants leaking into the water.

“The team in Milford leapt into action as soon as the boat showed signs of an oil spill. At this stage, there is a very small amount of contamination visible on the surface," he said.

“We will continue to be in close contact with those on the ground in Milford as the situation develops.”

A harbour boom has been put in place to contain the spill. There are minimal amounts of oil on board, and a team is working with insurers to raise and remove the boat from the water.

The boat was an ex-fishing boat that was being used for accommodation. 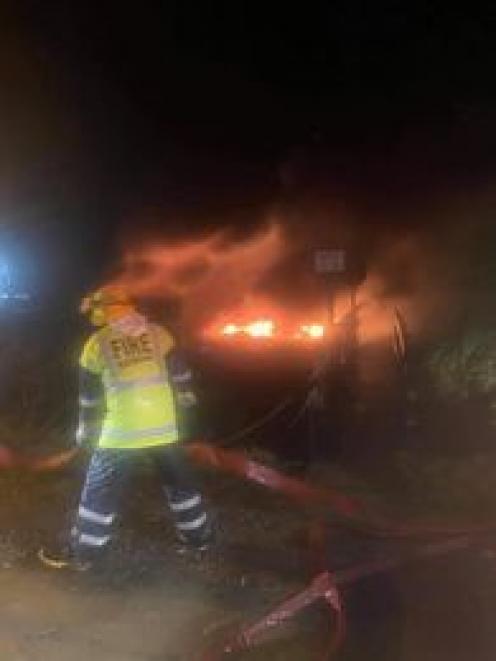 Firefighters were alerted to the blaze about 4am. Photo: Shane Nyhon

Fire and Emergency New Zealand received a call shortly after 4am today to Fisherman's Wharf in Deepwater Basin following reports of a fire on the boat.

There was no-one on board and no injuries.

‘‘We are keen to get it watertight as soon as possible - but it won’t be an easy fix.”

Earlier this morning, Fenz spokesman Brent Dunn said the Milford Sound Fire Brigade was at the scene battling the blaze and was helped by some fishermen.

Poor weather conditions meant help could not initially be flown in and the road was closed due to an avalanche risk.

As of 9am, an Environment Southland spokeswoman confirmed that the fire had been extinguished.

Mr Cleaver said he would continue to stay in close contact with those on the ground in Milford.

All relevant agencies had been notified including Maritime New Zealand, Fiordland Marine Guardians and the Department of Conservation.

“The people in Milford did an excellent job putting out the fire and looking after the situation with no external help," he said.