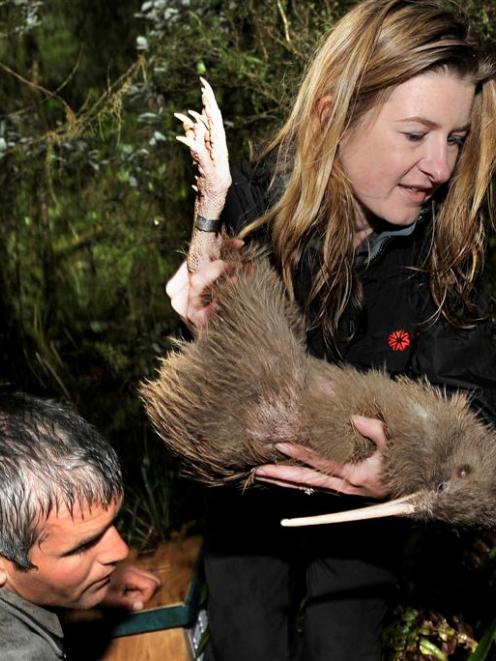 Department of Conservation biodiversity ranger Peter Kirkman and Southern Discoveries marketing co-ordinator Anita Golden prepare one of two kiwi for release at Sinbad Gully, Fiordland, on Thursday. Photo supplied.
Staff from the Department of Conservation and Southern Discoveries spent more than a week camping in Sinbad Gully, at the base of Mitre Peak, playing recorded kiwi calls, to ensure the safety of a pair of breeding kiwi before their release this week.

The birds were introduced to the area as part of the Sinbad Sanctuary Project, an initiative funded by Doc, Southern Discoveries and the Fiordland Conservation Trust, which aims to protect the habitat of rare species in the area, working to provide an environment free of pests like stoats, rats and possums.

Doc Te Anau Area manager Reg Kemper said the plan was to release the birds into the middle of the valley where they were "reasonably certain" there were no kiwi in close proximity.

Kiwi were territorial and "could be aggressive towards trespassers", Mr Kemper said.

"We're focused on taking practical steps to ensure the survival and safety of kiwi.

"Great efforts have been made to ensure the birds will fit in perfectly at Sinbad Gully."

After camping out and repeatedly playing the recorded kiwi calls and receiving no response from others, the group decided to transfer the breeding pair.

Mr Kemper said the Sinbad Sanctuary Project had proven to be "extremely successful" through predator control and consequently afforded the kiwi a "high level of protection".

Southern Discoveries general manager John Robson said the company was delighted: "It's very rewarding for us that we have reduced the pest population to such a degree within the first two years of the sanctuary project Doc is willing to increase the kiwi population in the valley."