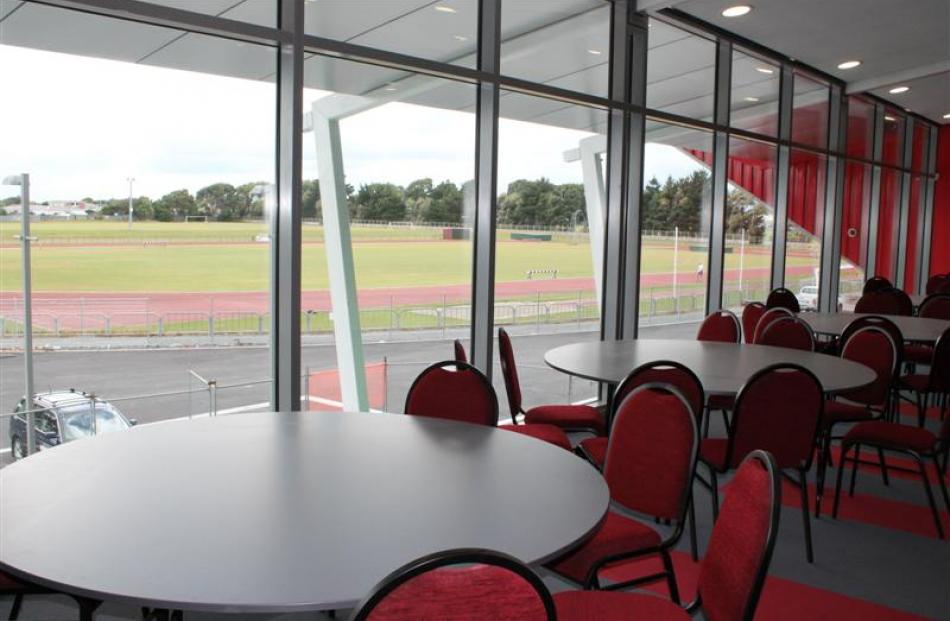 Looking from the Legends Lounge towards the Surrey Park athletics track. 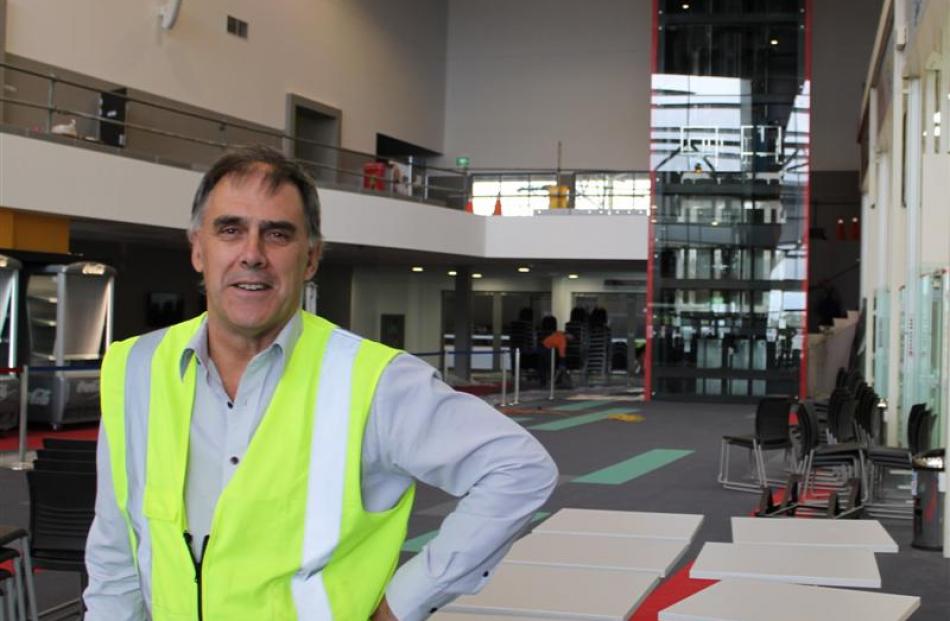 On a Saturday morning three and a-half years ago, the weight of an unexpected spring snowfall was enough to collapse the roof on Invercargill's stadium. Fortunately, the 25 or so people inside the building escaped without injury, but the community was left with a massive pile of rubble and an unusable venue. Now - 40 months and $44 million later - a new stadium has emerged from the ruins. Allison Rudd toured the new facility on Wednesday.

At ILT Stadium Southland, the atmosphere is at fever pitch. There are only five days until the doors reopen to the public, and while construction is completed and the seating and major fixtures and fittings are installed, the finishing touches are still under way.

Painters and plasterers are hard at work. Electricians thread metre after metre of cabling into the ceiling. Furniture waits to be placed. Seats need to be dusted, floors swept, carpets vacuumed and windows washed.

In a stadium which now boasts all the latest electronic bells and whistles, technicians are busy sorting a bewildering array of connections in a central computer server room.

Visitors are coming in and out. Between now and the end of the year, the stadium will host 65 events, ranging from sports games and charity boxing matches to concerts and food festivals and some of the organisers of those events are inspecting the surroundings.

General manager Nigel Skelt, who has lived and breathed the redevelopment, says while the collapse was unexpected and unwanted, it gave Southland an opportunity to create a bigger and better stadium.

''It's not often that people get a second chance, but we got one ... This stadium is about one and a-half times bigger than the old one.

''We've gone outwards, longer and higher. The only piece left from before is the central core.''

The design is similar to before - a main court area with community courts behind.

The main court has fixed seating on one wall and three sets of retractable seating giving a total capacity of 4017 - 880 more than previously.

The seats are padded, with cup-holders between. Mr Skelt says the comfort of spectators is paramount.

''We have put a real emphasis on our fan base and their comfort. They are are lifeblood and we want them to come here and enjoy the experience.''

The area has a retractable stage and theatre curtains to transform it from a sports arena to a performance space.

Another new feature is the ''monster screen'' - a four-sided screen which can be lowered from the ceiling.

It has already been trialled at a netball game, Mr Skelt says.

''You could watch the netballers on the court, and right above them was all the action on the big screens. It was fantastic.''

For spectators, the foyer and ticketing areas have been enlarged and the number of toilets doubled.

The changing rooms are large and comfortable, with donated spa pools for relaxing after the game.

Drug testing is a must these days, and the old stadium's adapted facilities have been replaced by a series of specialised testing rooms.

The children's climbing area and all-ages climbing wall have been moved to a more suitable location. Upstairs, the extended Legends Lounge is a multipurpose area which can seat up to 350 people.

The squash courts have been refurbished and new floors have been installed.

Even the 12 permanent staff and 28 casuals will be decked out in new uniforms come Monday.

Mr Skelt, who had to make some staff redundant after the 2010 snowstorm, said he was ''thrilled'' for his staff that the redevelopment was completed.

''They have been through a hell of a time. To get them back home again is cool.''

Of course, like every community project, there has been angst about the cost.

The trust which runs the stadium does not have $44 million yet, despite generous funding from Southland funding organisations and councils, naming rights contributions and an insurance payout of more than $20 million, and has indicated it might launch a public appeal to meet the shortfall. It has not said yet exactly what that shortfall will be but it expected is to be more than $1.5 million.

Mr Skelt says Southlanders are enthusiastic about the redevelopment.

''Everything we have done has been about future-proofing the stadium for future generations ... Now we have a world-class facility. We have lifted the bar in every area.''