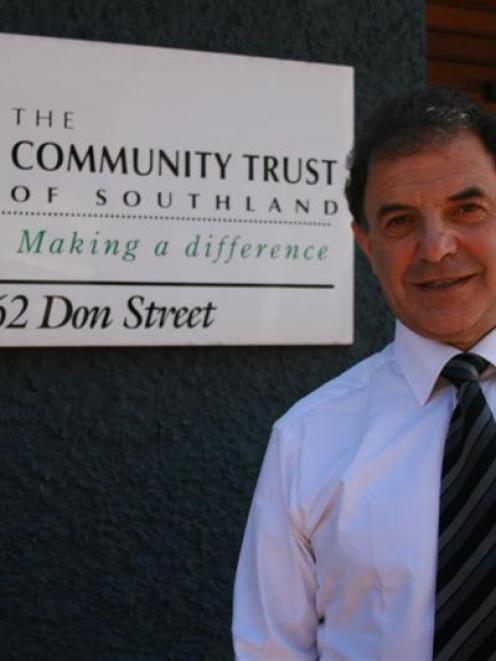 Malcolm Farry, of Carisbrook Stadium Trust, outside the Community Trust of Southland in Don St, Invercargill, last year. Photo by Hamish McNeilly
Representatives from the Carisbrook Stadium Trust will venture south this week, hoping to persuade people to not only support the project - but also pay for some of the Awatea St stadium.

A public forum on the stadium was meant to be held in Invercargill last week, but a clash with the Southland Sports Awards meant it will be held this Thursday, followed by a breakfast presentation in Gore on Friday, and then Queenstown on May 19.

Trust chairman Malcolm Farry said the tour would be an opportunity to discuss the project and detail some of the packages available"We want everyone south of the Waitaki to believe they have ownership in the stadium.

It has to be supported, and people have to use it," he said.

The trust would be marketing several products, including seats available on a 10-year right-of-renewal basis, for $1500 per year - of which 463 had been sold, and corporate suites.

With expressions of interest for the $45,000-a-year corporate suites already full, the trust was exploring the possibility of building another floor to meet demand, he said.

In June, Mr Farry floated the idea of a Southland stand to capitalise on community funders unable to fund outside their area.

Under the plan, a piece of the stadium would be zoned as belonging to Southland to attract possible funding from the Invercargill Licensing Trust and the Community Trust of Southland.

While the idea of a Southland stand was still possible, it was likely to be funded by corporate rather than community backers.

The idea has not been canned.

"But we are looking to develop a very interactive product for Central Otago, North Otago and Southland," he said.

Mr Farry would not elaborate on what the project would entail, but said one possible idea was for companies to buy naming rights for specific seats.

In addition to southern funding, the trust was also courting interest further afield, receiving expressions of interests "from people in Auckland with a connection to the region".

"There is tremendous interest in the stadium down here, and while people may not be so keen to pay for it, they are certainly interested to find out all the information."

Invercargill Mayor Tim Shadbolt said along with other mayors south of the Waitaki, he had been kept up to date with the project "but we have never received a request for funding".

While it was unlikely Southland community funders would contribute to the project, Mr Shadbolt said "You can never say never".

"Everything in this world is open for negotiation."