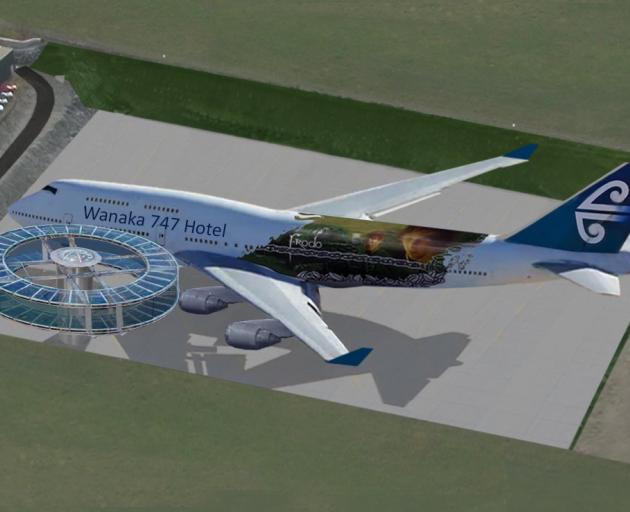 An artist’s impression of how a former Air New Zealand Boeing 747 might appear as a hotel at Wanaka Airport. IMAGE: SUPPLIED
Investors are being sought to help turn a Boeing 747-400 into a boutique hotel next to Wanaka Airport.

The plane is in Spain and almost ready to take its last flight to the breakers yard in the United States — but a group of aviation enthusiasts, headed by Radio New Zealand National announcer Paul Brennan, is trying to save it.

"We don’t want to lose it because it’s the only original Air New Zealand 747 left."

Mr Brennan would like to buy it — for between $1million and $2million — fly it to Christchurch Airport, take off its wings and engines, and truck the parts to Wanaka’s National Transport and Toy Museum.

Mr Brennan said turning a 747 into a hotel was quite feasible and it was a "great business opportunity" for "the people with the big money".

The Air NZ plane was once painted with a promotional scene from The Lord of the Rings trilogy.

"It’s well known to Lord of the Rings fans around the world and that’s another added attraction if you are trying to get people to go stay there."

Sweden already had a 747 hotel, at Arlanda Airport, which had been "incredibly successful", Mr Brennan said.

Another 747 was being converted to a hotel in the Netherlands, and the Burning Man festival in the United States had a 747 nightclub.

Mr Brennan said Air NZ sold the plane in 2014 to a Florida company and it last flew in November.

It is parked at a Spanish airport and is likely to be retired in January or February.

Mr Brennan said he had been talking to the owner since 2017 and knew the plane’s days were numbered, although its retirement had been accelerated by the Covid-19 pandemic.

"The main thing is recovering it, and if we can just get it back, even if it’s parked up for a while, it’s not going to go under the arm of a digger, which is what they use to rip these things to pieces.

"We don’t want that to happen."