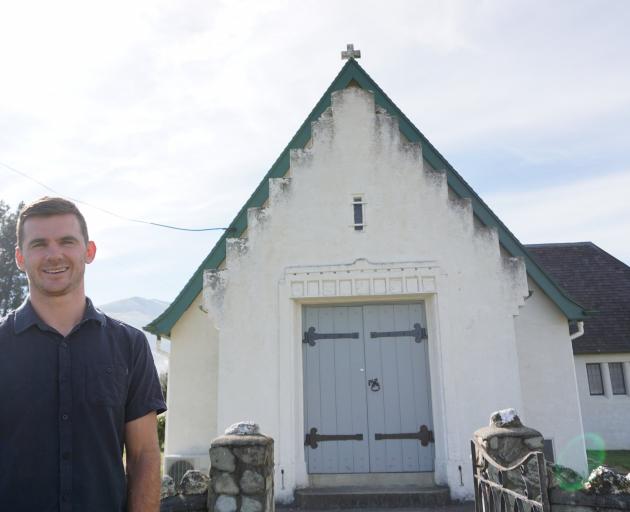 The growing population in the Hawea area has led the Upper Clutha Presbyterian parish to appoint Aaron Johnstone as the new full-time minister at St Ninian’s Hawea Community Church. PHOTO: SEAN NUGENT
A smile, a positive attitude and a helping hand. That is what Aaron Johnstone, the new full-time minister at St Ninian's Hawea Community Church, has to offer to the communities of Lake Hawea and Hawea Flat.

Mr Johnstone (32) was inducted and ordained at the church on Thursday night and said he was looking forward to his new role.

For the past two years, Mr Johnstone has been an intern at the Presbyterian Church's Upper Clutha Parish, under the guidance of Rev Ian Hislop.

Mr Johnstone said a growing population in the Hawea area had led the parish to decide to change services at St Ninian's in Hawea Flat from once a month to once a week.

"We just realised that this is a special place here in Hawea. We didn't want it to be like a lot of rural churches that end up shutting down. We wanted to provide a home for the locals in Hawea."

"We don't get huge numbers, we probably get about 20 or 30 people at each service.

"But we think by having a bigger presence in the area and more regularly available for people, we hope that people can call this their home church in time."

Mr Johnstone grew up in Gore, where he met his future wife Laura, and trained to be an engineer, a profession he worked in for some years.

It was not until he and his wife moved to the United States, where Mrs Johnstone worked as a veterinarian, that he began his journey to becoming a minister.

"I'd always been involved in the church.

"I did some bible study which was something I had always wanted to do and after doing some bible study, we got the feeling that God wanted us to put engineering to the side and pursue a call into ministry."

The pair moved back to New Zealand and to Wanaka two years ago, where Mr Johnstone began his internship at the Upper Clutha Parish.

They live in Cromwell with their children Luke (4) and Phoebe (1), while they are building a home in Hawea.

Another child is expected next month, and they were looking forward to being a part of the Hawea community.