Courtney Duncan’s tenacity is ultimately what separates her from her rivals.

She won nine of the 10 races in the series and claimed victory with a race to spare. It was an utterly dominant performance.

That coupled with her wonderful back story has resulted in her being named named NZME Sports Woman of the Year at the ASB Otago Sports Awards.

‘‘It was definitely cool to finally get across the line,’’ Duncan told the Otago Daily Times when asked about what it felt line to finally win the world title .

‘‘To have my family and friends over there at the time was special and, on top of that, to have a warm welcome home was really cool as well.’’ 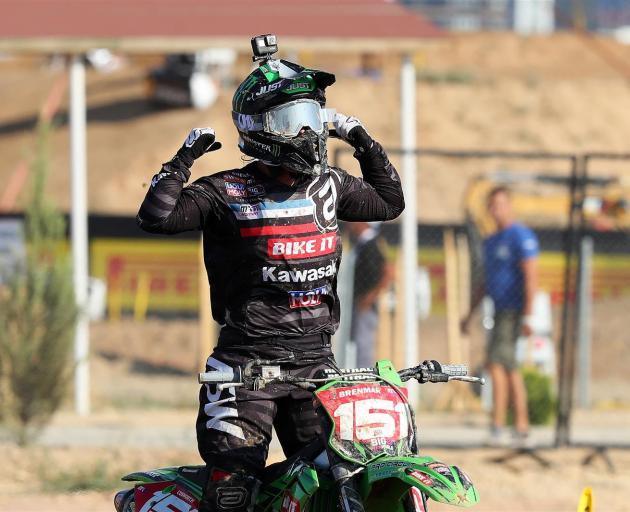 Champion at last ... Dunedin's Courtney Duncan celebrates sewing up last year’s Women's Motocross World Championship after comfortably winning the penultimate race of the season in Turkey in September. PHOTO: KAWASAKI EUROPE
For those unfamiliar with Duncan’s rise to the top, she had to battle back from a series of setbacks which cost her a shot a the title for three consecutive years. Since her debut in 2016, Duncan has consistently been the fastest rider on the circuit.

But her rookie season was derailed when she crashed into a photographer. The following year a controversial decision by the officials robbed her of valuable competition points, and in 2018 she was forced to pulled out of the championships with an injury despite having a huge lead in the series.

The doubt had started to close in on the upbeat rider.

‘‘There were definitely some days when I’d lay in bed wondering was I ever going to get across the line.

‘‘It weighed on me a lot but I still had that belief and knowledge deep down that I had something that was good enough.

‘‘It was just about putting all the pieces of the puzzle together and just figuring it out was the main thing.

‘‘Without a doubt, that took a toll on me. What made it really hard was I would get through one injury, have a couple of months on the bike and then there seemed to be another big injury.’’

Of all the setbacks, 2018 was the hardest to swallow, she said.

But last year’s win helped erase the pain and she is focused on defending her title this season.

She leads the series after four races but it is unclear whether the championship will resume. It was suspended in March due to Covid-19. However, round three in Turkey has been tentatively rescheduled for early September.