Some changes off the field paid dividends for the North Otago rugby team on the field last season.

The successful side has won the Otago Daily Times team of the year in the Otago Sports Awards. It was not fancied by some, but ended up claiming the Meads Cup with a convincing 33-19 win over Wanganui in the final.

North Otago coach Jason Forrest said the award was very humbling for a bunch of men who worked hard all season.

‘‘It was a huge surprise. Pretty stoked about it, really. A very surreal year for us and a great year,’’ he said.

‘‘We identified pretty early on we had to change a few things off the field which led to a better culture on the field.

‘‘They were just a bunch of guys who wanted to play well for each other. A bunch of battlers, really, who just gave everything out on the paddock.’’ 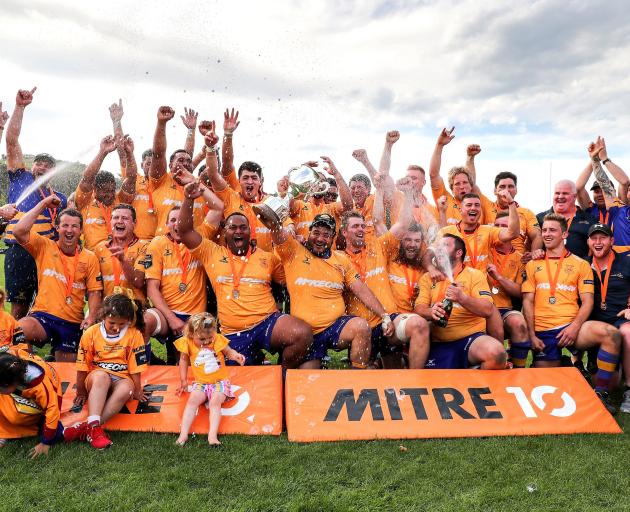 The North Otago team celebrates with the Meads Cup after beating Wanganui in the final at Whitestone Contracting Stadium in Oamaru last October. PHOTO: GETTY IMAGES
The Old Golds had only been in the Lochore Cup semifinals in previous seasons but turned it around last year.

They finished second in the Heartland Championship ladder, losing just two games. They beat Wairarapa-Bush in the semifinal then had the convincing win over Wanganui in the final in Oamaru.

Forrest said a two-day camp in Otematata at the start of the season set the standard.

‘‘It was brutal, but the guys just never stopped and showed what they were made of. I think we just had a really good work ethic around things.

‘‘The discipline had not been what it had been when I first got involved with the team 12 or 13 years ago. We managed to get that back.’’

The side was made up of experienced hands and some young players, along with loan players from Dunedin.

Forrest said the Dunedin players were a real asset and the side came together very well. In the end, that camaraderie was the key to the side’s success.

Due to NZ Rugby making budget cuts, the Heartland Championship will not be played this year, but it is hoped North Otago will play some games later in the season against other Heartland sides in the South Island.