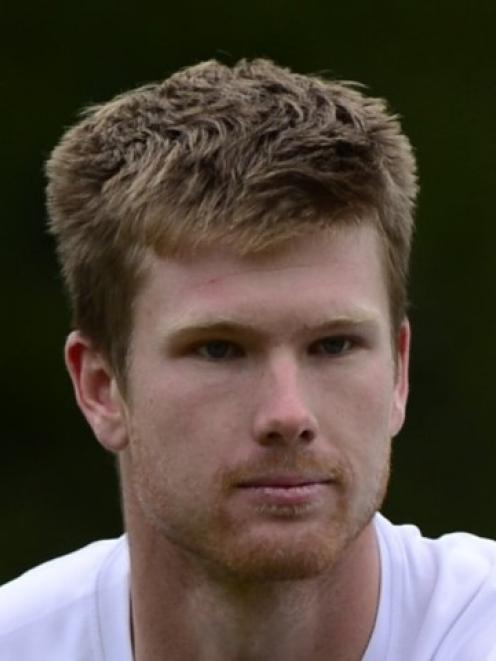 Jimmy Neesham
It's become something of a selection conundrum: Jimmy Neesham or Corey Anderson as preferred New Zealand test allrounder.

Both are included in New Zealand's 15-strong squad for the lip-smacking prospect of three tests in Australia in November.

But is there room for both? Tricky, unless one develops as an outright third seamer, or no spinner is required.

They have doubled up three times since Neesham played the first of his eight tests, the magnificent, defiant draw against India in Wellington early last year.

Neesham made his maiden century there, helping his skipper save the match, and secure the series win. They appeared together twice in the United Arab Emirates late last year. Both are battling back issues.

Neesham averages 43.28 with the bat and has 11 wickets at 32 apiece in tests; Anderson, whose test career began three months earlier, averages 31.35 with the bat, and his 13 wickets have cost 38.

Their ability to deliver overs to back up the three frontline seamers - who are sure to be Tim Southee and Trent Boult, plus one of Doug Bracewell or Matt Henry - and solitary spinner Mark Craig persuaded selectors Mike Hesson and Gavin Larsen not to take a fifth specialist fast bowler.

But there have been times when neither Anderson nor Neesham's bowling has impressed. Penetration has been an issue. Brisbane, Perth and Adelaide will give them help, and if things go wrong they'll need to deliver.

"A lot of our recent success has been based on the value of our No6 batsman bowling some overs and we're comfortable continuing in that vein," coach Hesson said.

Mark Craig shoulders the spin job and a second specialist was never really a factor.

Backup wicketkeeper Luke Ronchi's test debut at Leeds in May was an outstanding success. He hit a bristling 88 and 31, which played important parts in a thoroughly convincing victory. However his one-day batting has gone to the pack. Still, backup on the ground is useful, given first choice BJ Watling's knee injury in England.

Hamish Rutherford gets the spare batting spot but he's unlikely to dislodge Martin Guptill and Tom Latham, unless one of them completely loses the plot.

New Zealand A teams to play Sri Lanka - four 50-over clashes on October 5, 7, 10 and 13, and two four-dayers starting on October 17 and 24, all at Lincoln or Christchurch - contain interesting pointers to the future. Wheeler is kept busy in both squads, so too promising batsman Will Young and allrounder Mitchell Santner, who has made a favourable early impression.