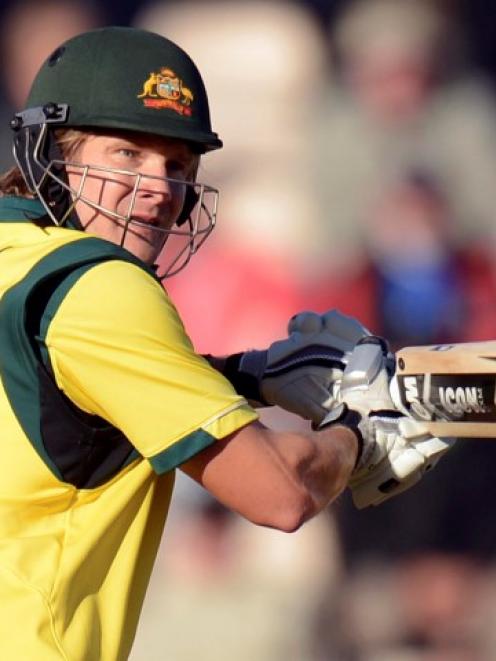 Shane Watson
Shane Watson took a battering at Eden Park in Australian training yesterday ... before he faced a delivery.

He was compared to a Queensland fruit fly, as in being "an Australian pest"; he wore the brunt after teammate David Warner suggested they need to force New Zealand captain Brendon McCullum to have a "brain explosion"; and he was asked if it was "crunch time" to make runs to hold his spot in the side.

Watson did a sterling job brushing off the verbal bruises ahead of the World Cup match against New Zealand on Saturday.

"I'm not very good at sledging, it's more just the occasional letting off frustration than anything," he said. "Maybe the New Zealanders are better [at handling it] than us.

"I know Saturday's going to be hostile from the times I've played here before. I certainly know we're not favourites. That's the exciting thing about playing here. We know we're not very welcome. Players and fans do everything to prevent us winning."

The paradox is that New Zealand players and fans will welcome the Australians for what should, if the weather plays its part, present the ultimate challenge to a team on the rise.

Four matches ago Watson made 82 against South Africa in November and has had scores of 16, 41 and 0 since to average 27.75 this summer in eight ODIs.

"It's crunch time for me to score runs in general," Watson said.

Regardless of his form dip, the 33-year-old brings the experience of 181 ODIs stretching back to 2002. His is one of numerous intriguing tales that will take the field on Saturday; the first time the sides have met since the washed out 2013 Champions Trophy match in Birmingham.

He agreed with Warner that targeting McCullum was key.

"He's a very aggressive player but we know he's going to take a few risks. It can be devastating because he can hit your best ball to the boundary and take the game away from any opposition. When a player of his quality comes in, you've got to have a few good plans. With that high-risk game there's still a chance of getting him out."

Watson said the dimensions of the ground were pivotal.

"It's a bit different to the MCG out there. It provides more of a challenge for bowlers to defend a ground like Eden Park. There are some very short pockets and some bigger ones as well.

"It's not your standard cricket ground and it can feel right on top of you with so many New Zealanders not enjoying our company," Watson laughed.

Camaraderie was high though.

"We're not strangers. That's the great thing about the IPL [Indian Premier League]. You get to know the opposition. Tim Southee was on my team [the Rajasthan Royals] and it was good to get to know him ... well, sort of. I didn't have a high opinion playing against him, but know now he's a nice guy."

Watson confirmed fellow all-rounder James Faulkner was bowling off a short run and had batted unrestricted for at least a week as he was recovering from a side strain, meaning his return to the side was "getting close".

- By Andrew Alderson of the New Zealand Herald