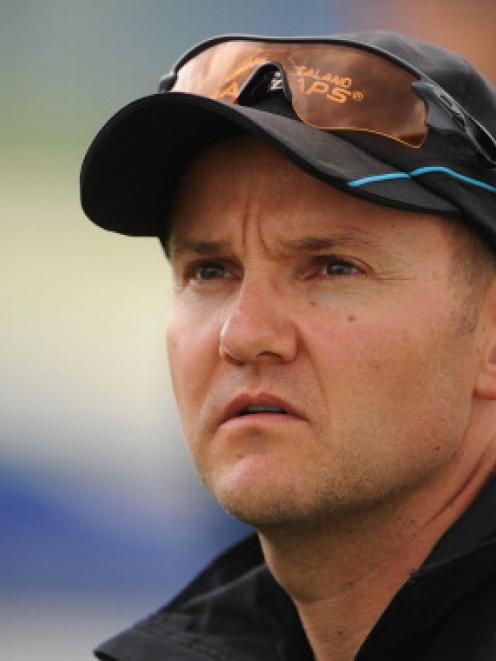 Mike Hesson
New Zealand coach Mike Hesson has said he will not put pressure on any of his players to make up their minds about their playing futures in the wake of the team's disappointing World Cup final loss to Australia.

New Zealand media have speculated that captain Brendon McCullum and spinner Daniel Vettori may be set to announce their retirements from one-day international cricket to allow the team to rebuild for the 2019 tournament in England.

At 36, pace bowler Kyle Mills may also be set to hang up his boots.

"I won't be twisting anyone's arm," Hesson told reporters in Melbourne on Monday. "I think it's important to have people who really want to play. I have no doubt we'll find out in the next wee while who those (players) are."

McCullum was bowled for a duck in the first over of New Zealand's seven-wicket loss at the Melbourne Cricket Ground on Sunday, but otherwise led his side with aplomb into a first World Cup final.

Inspiring with his swashbuckling batting and aggressive field-setting, McCullum turned New Zealand from strugglers into one-day heavyweights in two years and will be hard to replace.

The former wicketkeeper has long complained of back problems and said throughout the New Zealand summer that he was treating every game as his last.

Batsman Kane Williamson is being groomed to take the reins but Hesson said he hoped McCullum would stick around.

"He's huge for us, he sets the tone, the guys love to play for him, so I certainly hope he's around.

"Let's cross that bridge when we come to it. I'm not even contemplating it, to be fair.

"Now is the time just to reflect on the World Cup and in due course we'll look at the future."

New Zealand exited the tournament justifiably proud of their achievements, and their attack-at-all-costs approach to the one-day game may well be emulated by a number of sides over the next four-year cycle.

McCullum said after the final he hoped his team's breathtaking run to the final might inspire up and coming cricketers to emulate their aggressive mind-set.

"Hopefully that will the filter down to our domestic cricket as well and we'll get some youngsters start to play the game, and try and play it the same way we've tried to operate in this World Cup," he said.

"Once you're in the final you give yourself an opportunity to win it. If we can keep making finals we'll win one at some point."