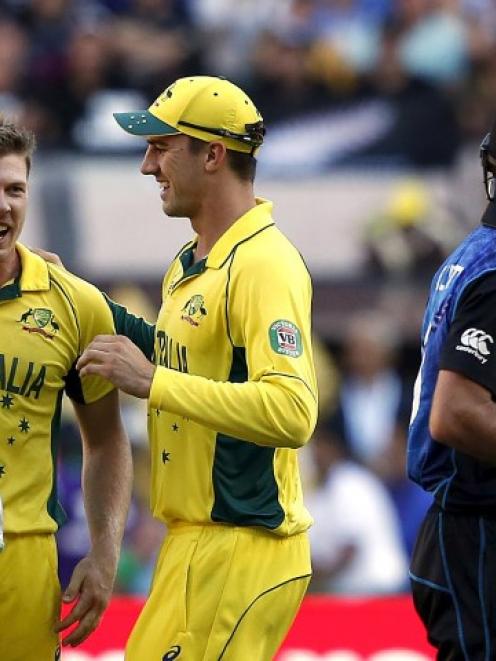 Australia wicketkeeper Brad Haddin (L) celebrates with team-mates James Faulkner (2nd L) and Mitchell Starc after dismissing New Zealand's Grant Elliott (R). REUTERS/Jason Reed
The sportsmanship displayed by Black Cap Grant Elliott during the Cricket World Cup's semifinal was thrown back in his face last night, after Australian players appeared to taunt him when he was dismissed in the Melbourne final.

Images tweeted captured the difference between two flashpoints -- the first last Tuesday when Elliott extended a helping hand to South Africa's Dale Steyn after New Zealand's dramatic win at Eden Park, and the second last night where the 36-year-old all-rounder was dismissed for 83 after a comparably brilliant innings.

Last night's images showed Australian wicket-keeper Brad Haddin -- who caught Elliott -- bowler James Faulkner and Pat Cummins giving Elliott what appears to be an earful as he leaves the field. Elliott turns towards them, holding his bat, and keeps walking.

The incident was bad enough to prompt television commentator and former England captain Nasser Hussain to assert that Elliott, the New Zealand top-scorer, was subject to sledging throughout his innings.

Soon after, hundreds of tweets comparing Elliott's sportsmanship with the Australians' perceived lack of it began to flood the social networking site.

One, by a user with the handle @LeftArmAround was mentioned hundreds of times.

"Sledging a guy who's just got out after playing brilliantly. The reason why most neutrals despise Australian teams. Graceless," he wrote.

Other tweets included: "Sportsmanship has never been their strong point. Sledging is such a disappointment." wrote @iamamyhenry.

Fans also noticed that, in contrast, when Australian captain Michael Clarke was dismissed, the New Zealanders were keen to rush and congratulate him in recognition of his retirement from the ODI game.

Skipper Brendon McCullum ran across the field to shake Clarke's hand after he was bowled out for 74 runs.

The incident follows a vow from International Cricket Council chief executive David Richardson last month that there would be a crackdown on sledging and poor on-field behaviour.

Even Sydney Morning Herald sports columnist Greg Baum recognised the sledging, saying wicketkeeper Brad Haddin was "a boor as he mocked [Martin] Guptill in the moment of his dismissal".

"Later, there were more snarly words for Elliott. It is why this Australian team - even in this triumphal moment - is more admired as cricketers than loved as sportsmen. Clarke said he saw nothing."