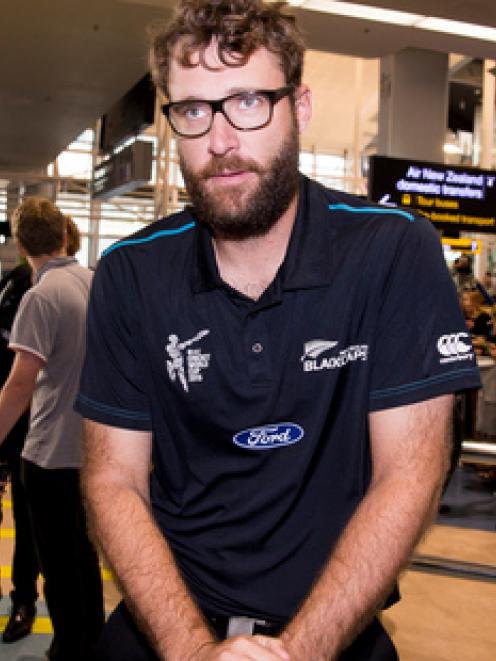 Daniel Vettori: 'You don't plan for anything but as far as finishing on a high and doing it with a really good team is very satisfying.' Photo NZ Herald
Daniel Vettori exited cricket in the same way he tended to play the game.

As he met the throng of fans at Auckland airport today, he was asked if his indication that he had played his last game for New Zealand was an official announcement.

"I suppose it is," he said, almost as if it hadn't occurred to him that he needed to say anything.

"It was my last game for New Zealand in the final so it was a lovely way to finish. Obviously it would have been great to win but I'm pretty proud of everyone and the way we have gone about things over the last six weeks.

"You don't plan for anything but as far as finishing on a high and doing it with a really good team is very satisfying."

It summed up the way this New Zealand team play cricket these days and contrasted sharply with Australian captain Michael Clarke's announcement that he was quitting one-day internationals on the eve of Sunday's final.

Vettori's announcement was hardly a surprise. His body has been ailing him for some time and he did well to get back from a series of Achilles injuries for one last fling with a side he has been a part of for the best part of 18 years.

"To be able to get back from a number of injuries and to be here and a part of it, and hopefully a big contributing factor into us making that final, is something I will always treasure," he said.

Vettori was clearly suffering in the final and scored nine runs and took 0-25 from five overs on Sunday. He revealed yesterday he had blown a calf in the warmup on Sunday and was clearly restricted in his movement during the final as Australia cruised to an easy victory.

But he otherwise had a terrific World Cup, taking 13 wickets at an average of 20.46 while going for only 4.04 runs an over.

He admitted he hadn't had much time to reflect on what the Black Caps achieved in the World Cup and won't in the short-term given he heads to India on Thursday where he will coach the Royal Challengers Bangalore in the Indian Premier League Twenty20 competition.

Coaching is a path he could follow, and he's also been linked with taking over the Brisbane Heat in Australia's Big Bash League, but he dismissed talk of working with the New Zealand team.

"Not really. That's not my place. I have a lot of good friends in the team and I will keep in contact with them but not anything of that ilk."

Vettori was a baby-faced youth of 18 years and 10 days when he first broke into the New Zealand team, making his test debut against England at Wellington in 1997 despite having played only two first-class games. Later the same year, he made his ODI debut against Sri Lanka in Christchurch.

His contribution has been massive, certainly above his 362 test and 305 ODI wickets, and it was fitting he played a leading hand in New Zealand's World Cup run."Hopefully people have fallen in love with cricket, or fallen back in love with it," he said.

By the looks of the people at the airport yesterday, they have.