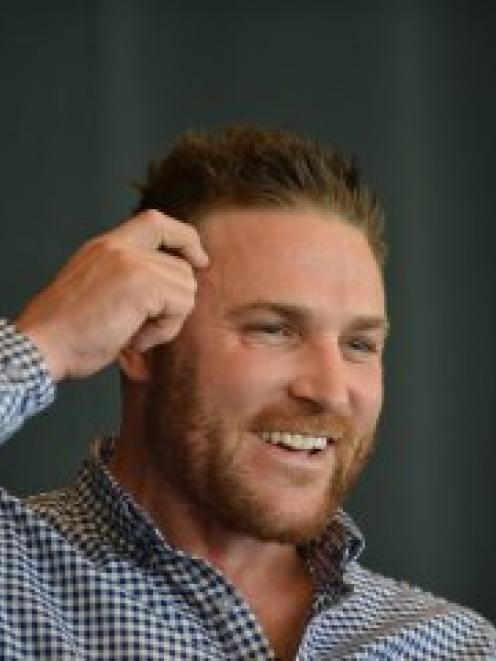 Brendon McCullum. Photo by ODT.
Just like that, the World Cup is over. There are a couple of big questions remaining, and cricket writer Adrian Seconi attempts to answer them.

Well, that was fun - but what happens now?

One-day cricket seemingly reinvented itself during the World Cup but the next tournament is four years away and the game will have to work hard to keep us all interested in the meantime.

One-day internationals still occupy a strange sort of no-man's land between twenty20, which appeals to the modern, time-poor spectator, and test cricket, which is the bastion of the purists.

The endless one-day series can all feel a little meaningless.

But a bold plan to rebrand one-day cricket, championed by Cricket Australia chairman Wally Edwards, has some merit.

Edwards would like to bring all ODIs under the World Cup banner in a bid to distinguish it from the test and twenty20 formats.

Under the proposal, all ODIs would count towards qualification for the next World Cup and potentially lead to some kind of series at the end of the year between the top-ranked teams.

Whatever the future, the Black Caps will need to do some rejigging before the next tournament.

The chances of Brendon McCullum returning in four years seem slim. While he would be only 37, he has struggled with his back and has already flirted with the idea of retirement.

His explosive batting will be near-impossible to replace but it is the more intangible qualities which we will not know how much we miss until he is gone.

No-one in the New Zealand cricketing scene exudes confidence quite like McCullum and that has been infectious over the years.

He has taught the team and its fans to believe, and his instincts for the game have set the bar very high for whoever replaces him as captain.

He is a very different type of character from McCullum but one who was seemingly born to play the game.

He will almost certainly be the batsman the Black Caps look to build their future around.

If the rumours are true, former captain Daniel Vettori will soon retire.

The 36-year-old veteran has been one hell of a player and unearthing another left-arm spinner of his quality might be a bit like looking for the next Sir Richard Hadlee.

Right-arm offspinner Nathan McCullum has done an admirable job when Vettori has been absent but he will be 38 at the next World Cup.

The answer could be Northern Districts lefty Mitchell Santner.

It is a punt but he seems to be a player rated highly by those who matter.

The good news is the core of the seam bowling attack should be ready for another tilt at the title.

Tim Southee and Trent Boult will have, hopefully, taken many more wickets in a golden period for New Zealand and be at the peak of their powers in 2019.

Matt Henry and Adam Milne have long careers ahead of them providing they can keep on top of their injuries.

Milne missed the semifinal and final with a heel injury and can be injury-prone.

If either falls away then look out for Otago's Jacob Duffy.

He has had a breakthrough Plunket Shield with three five-wicket bags in his last three first-class matches and was the Volts' leading wicket-taker in the domestic one-day competition with 18 scalps at an average of 23.

In four years, he could be right in the mix.

Corey Anderson had a good tournament and has cemented himself as the leading all-rounder ahead of Otago's Jimmy Neesham.

Neesham's challenge is to either become a genuine option as a third seamer or someone who demands a spot in the top six with the bat.

Ross Taylor will be 35 and certainly not over the hill, but he was not at his best during the tournament and he strikes a rather tortured figure.

I am not convinced he has another World Cup in him.

Taylor and McCullum's possible absence will open up opportunities for the likes of Central Districts' Will Young and Canterbury's Henry Nicholls, while World Cup squad member Tom Latham has first dibs on an opening spot.

BJ Watling is bound to take over the gloves from Luke Ronchi.

He is younger, a better gloveman and a stabilising influence in the middle order New Zealand could have done with during the final in Melbourne on Sunday.