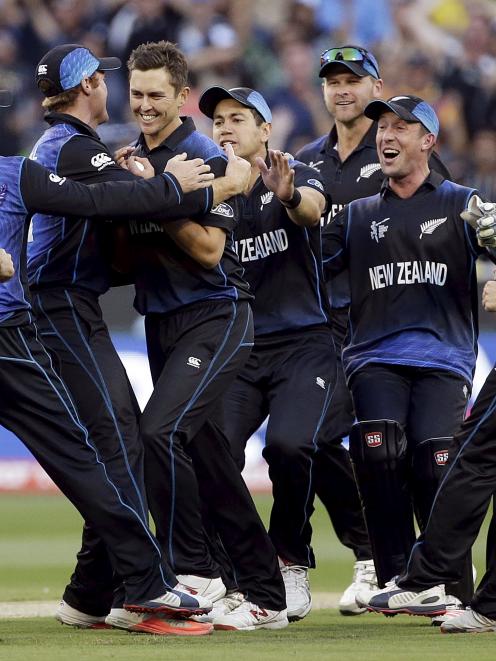 New Zealand's Trent Boult (C) is surrounded by team mates as they celebrate dismissing Australia's Aaron Finch for a duck during their Cricket World Cup final match at the Melbourne Cricket Ground. Photo by Reuters.
The Black Caps are set to pocket up to $210,240 each for their performance in the Cricket World Cup.

The cash prize is a hefty drop from the potential $410,942 the players would have banked if they brought the trophy home. But after their dream of winning the Cricket World Cup was dashed by the triumphant Australians last night, and so the team will share a $2.322 million runners-up prize fund.

The International Cricket Council (ICC) offers a total US$10 million [$13.2 million] prize fund across the tournament, an increase of 25 per cent from the 2011 Cricket World Cup.

If the Black Caps had won last night's game the squad would have scooped a $5.333 million jackpot - a whopping $355,543 each - because of their unbeaten run to the final. But because the Australians lost two games before reaching the final, the men in the gold and green will share out a $4.972 million cash prize.

In addition, each Black Caps player will get $3500 per game played from New Zealand Cricket as part of its agreement with the Players' Association. That means players like captain Brendon McCullum, who played in each of the team's nine games, will take home $210,240.

The same calculation with the winning prize money, brought their earnings to $410,942.

But it is not yet known whether the players, who grabbed the world's attention with their remarkable sportsmanship on the field, will continue that trend off the field, and split the winnings 16 ways - to ensure coaching staff receive a portion, as in previous years.

Players' Association boss Heath Mills said he had not "had that chat yet" with the players, but previously told the Herald on Sunday that he "would imagine they'd be keen to do that".

"The prize money is significant but it's reflective of how much value there is in this tournament," he said earlier this month.

"There are significant commercial returns for the ICC and its member boards so it's only fair and right that the players share in that return."

The potential earnings dwarf those of the All Blacks, who pocketed a $100,000 bonus from the New Zealand Rugby Union for winning the 2011 Rugby World Cup, on top of their $7500 weekly fee and retainers.

* The breakdown of the prize money is: