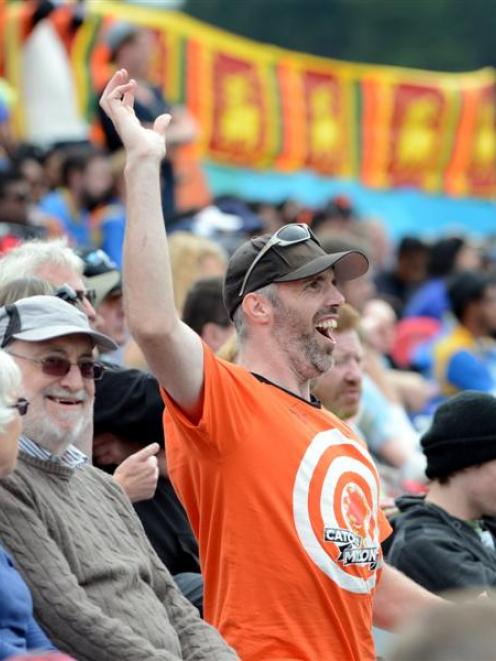 Jamie Gough celebrates after taking the catch during the Sri Lanka-Afghanistan match at the University Oval. Photo by Peter McIntosh.
Call it a windfall. Call it a gift from the heavens.

And that is money he plucked out of thin air.

The 34-year-old Dunedin cricket fan was one of seven people to take a one-handed catch during the ''Tui Catch a Million'' competition staged during the World Cup.

He made his grab during the Sri Lanka-Afghanistan fixture at Dunedin's University Oval last month.

''It is a little overwhelming, to tell you the truth, and a little hard to believe.''

He has been asked how he plans to spend it an awful lot and the sensible answer is that he is going to bung it on the mortgage.

''That probably makes the most sense. Bringing that down is huge but I've always told my wife I'll try to get her to Italy at some stage in our life and this has brought it a little bit closer now than it was six weeks ago.''

He has had to retell the story countless times and he owes a few people a round of drinks.

He was given the tickets to the game and had to switch shifts with a colleague so he could attend.

''And then I was only in the ground for four deliveries when I caught it.''

Had New Zealand managed to win the final, the prize pool would have risen to $1 million and his share rocketed to $142,857.

Gough attended the World Cup final in Melbourne and arrived back in New Zealand last night. He plans to catch up with family in Auckland before returning to Dunedin and, well, to work.

Interestingly, he is a physiotherapist who specialising in hand therapy.

Cue jokes about being in safe hands.