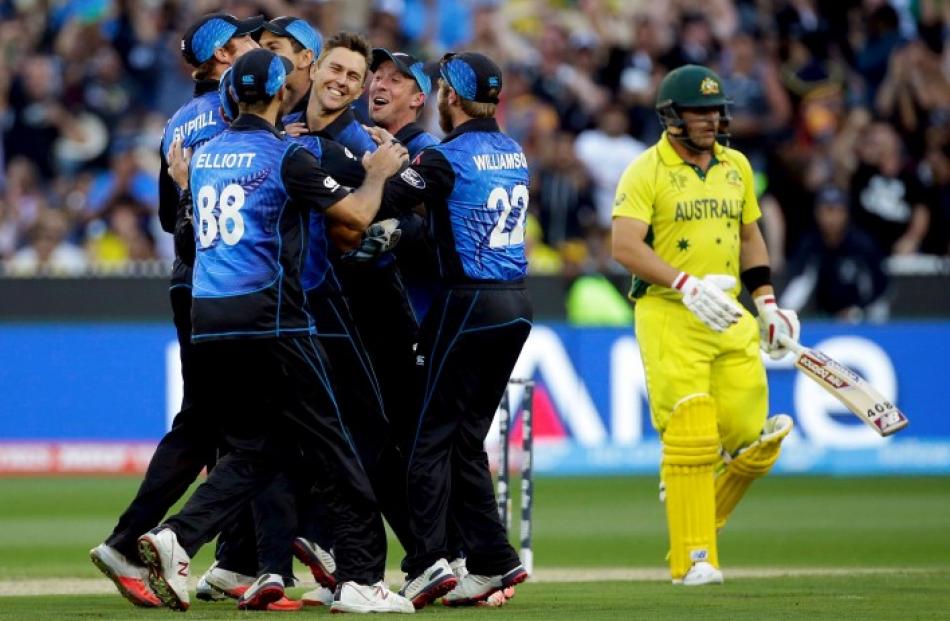 New Zealand's Trent Boult (C) is surrounded by teammates as they celebrate his dismissal of Australia's Aaron Finch (R) for a duck during the World Cup final in Melbourne. REUTERS/Hamish Blair

"I'm vehemently opposed to send-offs. Have a little bit of respect for the bloke, he's out -- let him walk off," he said.

Three New Zealand batsmen -- Martin Guptill, Grant Elliott and Dan Vettori -- were all given an earful by Australian players, including wicketkeeper Brad Haddin, after being dismissed during the game.

Haddin was also reported in Australian media yesterday saying New Zealand deserved the verbal sprays because they had been too "nice" earlier in the tournament.

"I said in the team meeting: 'I can't stand for this any more, we're going at them as hard as we can'," a report based on a radio phone interview with Haddin stated.

"It was that uncomfortable. All they were was nice to us for seven days," Haddin said. "I said, 'I'm not playing cricket like this. If we get another crack at these guys in the final I'm letting everything [out]'."

Richardson, who represented New Zealand from 2000-2004, said he had received and given plenty of send-offs in his playing days -- both at international and domestic level.

However, as he matured as a player, he realised the practice was not really in the spirit of the game, he said.

"I really don't have an issue with sledging when a person is out there, be it between batsman or bowler.

"I think gamesmanship is part of the game, but I don't like send-offs. I just find them tasteless."

While Australia was the best team, it probably needed to review its sledging antics as its cricketers seemed to be continually under fire for their behaviour.

"They see themselves as leaders of the game and they are the best cricketing nation [but] they are the constant common denominator and they probably do need to have a little bit of a look."

The Black Caps themselves have remained tight-lipped about the sledging. "What goes on the field stays on the field -- it was just friendly banter out there," Elliott told media. "It was pretty friendly stuff and it was just good to see how well the Aussies rated me as a player."