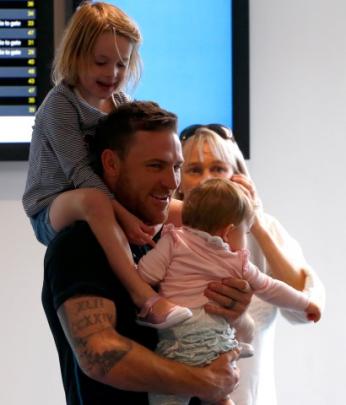 The Black Caps may not have brought the trophy home with them, but they returned to New Zealand as heroes after an emotional an eventful Cricket World Cup.

The team was greeted by several hundred cheering fans, many of them clamouring for autographs and holding mobile phones aloft, when they arrived at Auckland Airport this afternoon.

They were later given the red carpet treatment at a public welcoming ceremony at The Cloud on Auckland's Queens Wharf, where a crowd of thousands gathered to show their support and admiration following the team's defeat in the cup final on Sunday.

Humble as ever, and at times clearly emotional, Black Caps captain Brendon McCullum said the event was a chance to thank the fans.

"Even though we weren't able to lift the cup ... you all still managed to show up," he told the crowd.

"It shows how great the people in this country are."

McCullum said the semifinal was "the single greatest sporting event" he had been involved with.

The team had "prepared for the best" but was still blown away at how they'd captured the country, he said.

"I've said this time and time again, but this has been the greatest time of our lives and we have made some great memories and great friends."

Grant Elliott said he'd never been on a red carpet before and was enjoying meeting the young fans.

"When you talk to the kids and hear they don't play cricket but they say they might next year, that's really great," he said.

He later spilled some secrets to the crowd at The Cloud -- saying that Nathan McCullum was the original instigator of the 'Hairy Javelin' nickname, and that the Melbourne Cricket Ground really was as big as all the Twitter jokes made it out it to be.

Sport and Recreation Minister Jonathan Coleman said the team had inspired the next generation to become cricketers.

"You have represented this country in the best possible way. You have set the bar for sportsmanship."

That sentiment was shared by fans at The Cloud.

North Shore mums Joanne Duncan and Kirsten Terbraak, who went to the final in Melbourne with their families, said coming to see the team was "therapy" for them.

Ms Duncan said she had been through "such high highs, and then such a low" but wanted to show her support for the team.

Blake Jay, 8, had attended every world cup game held in Auckland with his father Clive, and was hoping to see his favourite player Trent Boult.

Mr Jay said his son had exclaimed "that was the best game ever" when New Zealand beat Australia in the pool match -- only to realise he was wrong after New Zealand's nail-biting semifinal victory against South Africa.

That game would turn out to be Daniel Vettori's last victory in an international match.

The 36-year-old player formally announced his retirement upon his arrival at Auckland Airport today.

Vettori said ending his 18-year career with a world cup final was a "lovely way to finish".

"Obviously it would've been great to win but I'm really proud of everyone and they way we've gone about things the last six weeks."

Vettori said it was a good feeling to see the supporters at the airport.

Among them was life-long Black Caps fan Paige Smith, 12, who was hoping to get Tim Southee's autograph.

She had stayed up late to watch the final, and when her mum sent her to bed she pulled out a wiggly tooth so she could stay up.

"I wanted to watch it so much," she said.

The big supporter didn't mind the outcome of the final -- she was just proud.

West Auckland cricket fan Geraldine Reid and her three children, aged 3 to 12, were well-prepared for the team's arrival. Yesterday, they had checked the team's arrival time and sussed out the best parking options.

"We just want to welcome them home to tell them how amazing they are and to let them know that we think they're terrific," Mrs Reid said.