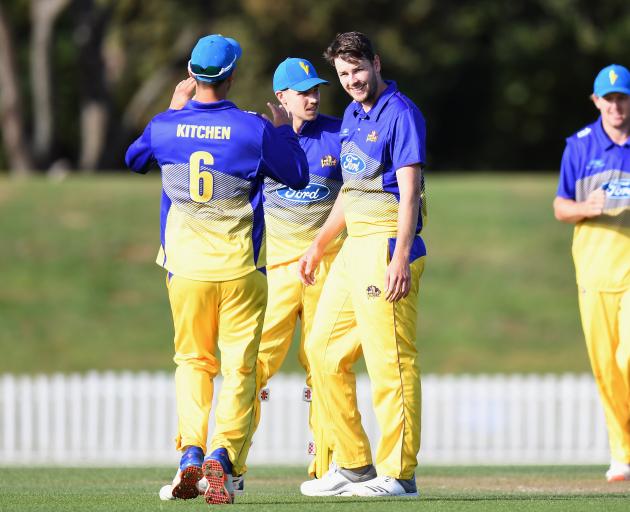 Otago captain Jacob Duffy picked up 3-41 to stop Canterbury in their tracks. Photo: Getty Images
One more to go.

The Otago Volts advanced to the Ford Trophy final in dramatic fashion yesterday.

Otago will now play Auckland for the one-day title at the Eden Park Outer Oval on Sunday.

The home side needed just 28 runs off 20 balls when the first of those five wickets fell.

But Nathan Smith and Jacob Duffy closed the game out brilliantly to give Otago a six-run win.

They finished with identical figures of three wickets for 41 runs, proving integral in restricting the Canterbury batsmen in their pursuit of Otago’s 294 for nine.

Otago coach Rob Walter was thrilled for the two players, particularly after a slip-up in the twenty20 elimination final last month.

‘‘They’ve done it a lot of times for us now and stood up in big pressure situations,’’ he said.

‘‘For me, I’m happy they were able to close this one out.

‘‘A lot of people will remember the T20 and not remember all the games they’ve won bowling at the death for us.

‘‘For me, to get over the line today proves their quality and hopefully dispels some of the ghosts from the T20 loss.’’

He felt the side had not played particularly well, although it was a good sign to be able to still win in those circumstances.

Otago started and finished well with the bat, although a collapse through the middle slowed it down.

Mitch Renwick top-scored with 75 and he combined with Neil Broom to put on 80 for the second wicket.

That left it at 125 for two when Broom was dismissed for 28.

It was still looking good when Nick Kelly went at 165 for three in the 28th over.

But a further three wickets fell — two to Todd Astle — for the next 16 runs.

However, at 181 for six, Dean Foxcroft and Anaru Kitchen put together a much-needed partnership.

Kitchen hit 52 off 44, while Foxcroft finished off well to score an unbeaten run-a-ball 55.

In reply, Canterbury had its chase under control for much of its innings.

Duffy struck early to claim Chad Bowes for 11, before Jack Boyle and Stephen Murdoch put on 111 for the second wicket.

Canterbury was at 132 off 27 overs when Rippon caught Murdoch for 53 off the bowling of Smith.

At the other end, Boyle continued to accumulate runs, although none of his other partners lasted more than 20 balls.

He brought up his century off 116 balls as Canterbury reached 250 in the 45th over.

It looked in a strong position with 28 needed off 20 balls and five wickets in hand.

Duffy and Smith each claimed wickets in consecutive overs.

However, Canterbury remained in control, needing 18 off 12 with Boyle still at the crease.

Duffy broke through, on the last ball of the penultimate over, Boyle attempting to go over the top and being caught by Hamish Rutherford.

That left Canterbury needing 11 off the final over.

Will Williams managed doubles off each of the first two balls, but Smith bowled him on the third.

A ball later it was over, as Matt Henry was run out trying to get to the striker’s end.