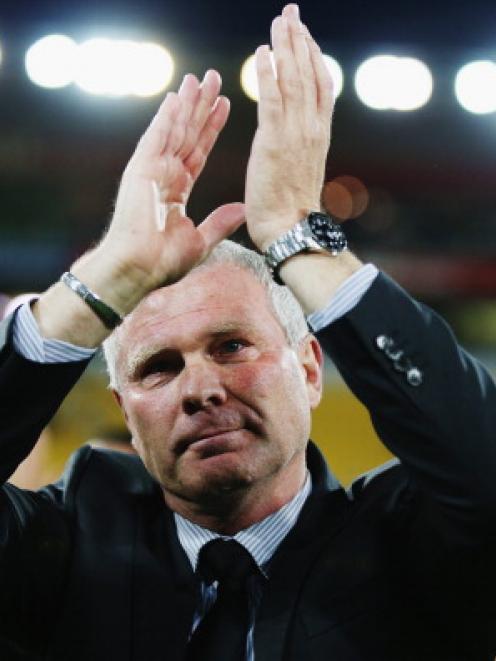 Ricki Herbert thanks the crowd after the All Whites' loss to Mexico in Wellington last night. Photo Getty Images
Ricki Herbert bowed out as All Whites coach last night, proud of a team that had "exposed" Mexico at times in the 4-2 defeat at Westpac Stadium.

It was Herbert's last press conference in charge of the national team and he took the chance to deliver a football sermon.

He traversed many subjects, from his legacy and achievements to his constant critics, as well as last night's match.

"I will wake up in the morning and think that the game is in an incredibly healthy position," said Herbert. "This inexperienced team showed some great potential and I look forward to 2018 and buying a ticket at Westpac Stadium to watch them play."

Herbert was obviously pleased with his team's performance, especially the second half where he said that the All Whites had "exposed" Mexico after trailing 3-0 at halftime.

"We exposed them [in the second half] - there were good periods of play, we got a couple of goals and who knows if Jeremy Brockie had got his [40th minute] penalty? It was a very solid, positive, good performance."

The high pressing game was always going to be dangerous against a team with the pedigree of Mexico and they ruthlessly punished New Zealand on the counter attack in the first half. But with the result of the tie dead and buried, it was good to see the All Whites with some genuine verve and pace on attack, with teenage fullback Bill Tuiloma and Kosta Barbarouses particular stand outs.

"The last 45 minutes was incredibly refreshing" said Herbert. "Every week I hear in the A League about possession based football and people need a year to get it right and get it ready; we are probably not going to get it right in one night against Mexico."

Whether he has had the players available to play a possession based style is debatable, but Herbert has never seemed to encourage an approach that values keeping the ball.

His contract has officially expired, but he will complete review and feedback processes with New Zealand Football over the next few weeks.