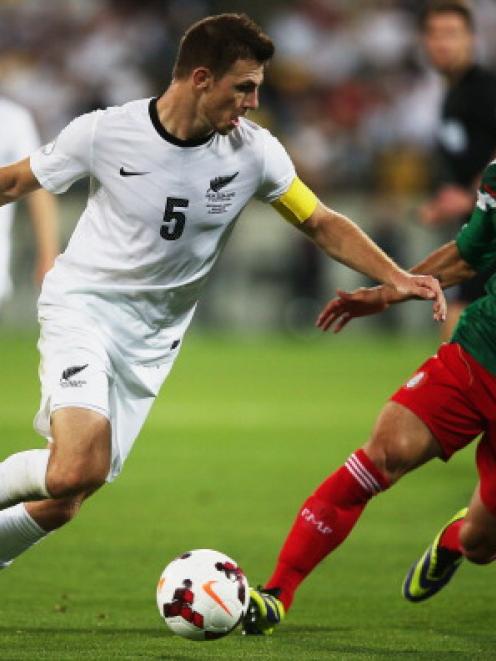 Tommy Smith in action against Mexico in Wellington. Photo Getty Images
All Whites captain Tommy Smith wants a "fresh approach" for the New Zealand side, moving away from the direct style that characterised the Ricki Herbert era.

After Mexico's 9-3 aggregate victory over two matches, Smith said the All Whites' modus operandi of the last eight years should be consigned to history if the team want to make progress.

Coming only hours after Herbert's final match concluded, it was the first subtle hint that maybe the squad were not totally on-side with Herbert's game plan and tactics; that perhaps the players felt stifled by the lack of adventure and ambition that sometimes frustrated the fans.

"Hopefully we can start to play a more productive passing game," said Smith.

"We want a fresh approach, keeping that style of football that we tried to play [on Wednesday]. That is the way forward in football these days."

Facing an impossible 5-1 deficit before Wednesday night's match, the players were let off the leash at Westpac Stadium.

Herbert's selection finally endowed the team with genuine weapons and they attacked with flair and invention. It meant the Mexicans were pressured into mistakes and the confidence of the home side grew as the match wore on.

Sure, it was always going to be a dangerous approach - and the All Whites were punished severely on the counter-attack - but it looked like a good template for the future.

"The days are gone when you just lump it forward and hope, and to be fair we haven't got the players to do that any more," said Smith.

"The players we have got coming through now are more technical than that and we need to approach a passing game."

Smith's candour is admirable. In Mexico City and Wellington the Ipswich defender was in charge of completely new backlines and marshalled his defence well, given the circumstances.

He was refreshingly honest after the "Azteca massacre", admitting the team had defended too deep and been too cautious, inviting the Mexicans to attack at will. He took some responsibility.

In contrast, Herbert has continued his recent pattern of shifting most of the blame on to the players.

After the shock Oceania Nations Cup defeat in Honiara last year he put a lot of the onus on senior players who hadn't performed.

Last week in Mexico it was the failure to implement the game plan and tactics during a "non-valid performance".

And on Wednesday it was poor defending, lack of pace in the centre of defence and inability to deal with one-on-one situations.

All of those thoughts may be valid, and there have been many contributing factors but Herbert would gain more respect if he admitted his own mistakes in terms of selection, tactics and strategy, not just during the recent games but in the past two years.

Smith also called on New Zealand Football to lift its game and let the team have a more extensive preparation before crucial and demanding games such as those against Mexico.

Before the Mexico games, the All Whites played Ventura County Fusion, Chivas USA and Trinidad and Tobago.

"We need a better standard of matches," said Smith. "Maybe try to get internationals penned in a bit earlier so other teams aren't booked up. NZF needs to address that - we need to be playing against international teams rather than club teams."