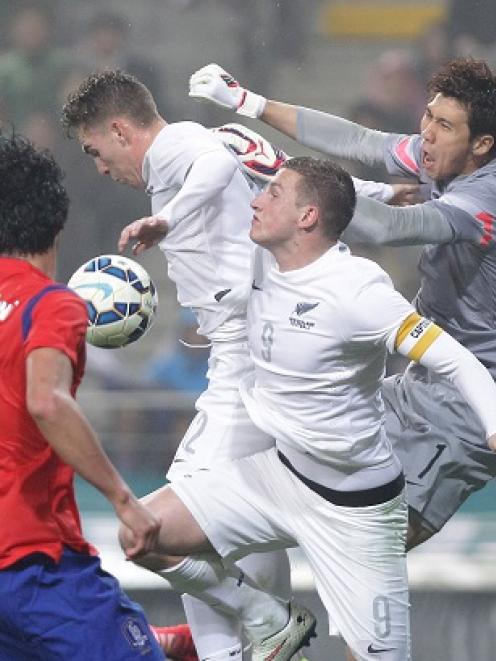 New Zealand's Chris Wood tries to outjump the South Korean defence. Photo by Getty
The All Whites have been beaten but far from disgraced against Korea Republic, going down 1-0 in Seoul.

It's another defeat, but was by some distance the best performance in the Anthony Hudson era.

They held their own against the Asian Cup runners-up, creating several good opportunities with some bright, enterprising football.

The Korean goal, conceded in the 86th minute, was unfortunate. The All Whites lost possession on the edge of their own area and were punished -- with Lee Jaesung striking home the rebound after New Zealand goal keeper Stefan Marinovic couldn't hold the initial shot.

Korea probably should have been ahead earlier on the balance of play, but a combination of some poor finishing from the home side and tremendous last ditch defence by the All Whites kept the game in the balance.

Just before the end of the first half, Chris Wood had the ball in the back of the net, but the goal was rubbed out for a foul as the New Zealander duelled with a defender for a long ball.

"I didn't see a lot in the challenge," said coach Hudson. "I thought we were really unlucky not to go 1-0 ahead at that stage."

"It was a goal - no doubt," agreed Wood. "It was shoulder to shoulder and they would always be given in the Premier League or Championship.

Wood also had New Zealand's best opportunity early on, when he evaded the Korean markers from a well worked corner kick. Unfortunately for the All Whites, his slightly mishit shot was directed straight at the goal keeper.

But the chance gave the visitors confidence and helped to settle some nerves after a frenetic opening to the match. The Koreans were superior in possession -- and built plenty of pressure -- but the All Whites enjoyed their own moments to shine, often from quick turnovers in possession..

The key moment of the first spell was the penalty, after the Malaysian referee judged that Marinovic had brought down the runaway Korean striker just inside the box. It looked a misjudgment by the debutant keeper, as he was favourite to win the race to the ball. But the 23-year-old, who has spent the last few years in the German third division, made up for it with an outstanding save to his right to deny Heungmin.

Just before the end of the first half, Wood had the ball in the back of the net, but the goal was rubbed out for an inconclusive foul after the New Zealander pursued a long ball beside his marker.

"I think it was a goal - no doubt," said Wood. "It was shoulder to shoulder and they would always be given in the Premier League or Championship."

Many contributed to the solid team debut. Wood and Bill Tuiloma were particularly impressive and Michael McGlinchey also had a fine game, though his errant turn in possession led to the Korean goal.

- Michael Burgess of the Herald on Sunday at Seoul World Cup Stadium/Michael Burgess travelled to Korea with assistance from ASB, the principal partner of New Zealand Football.