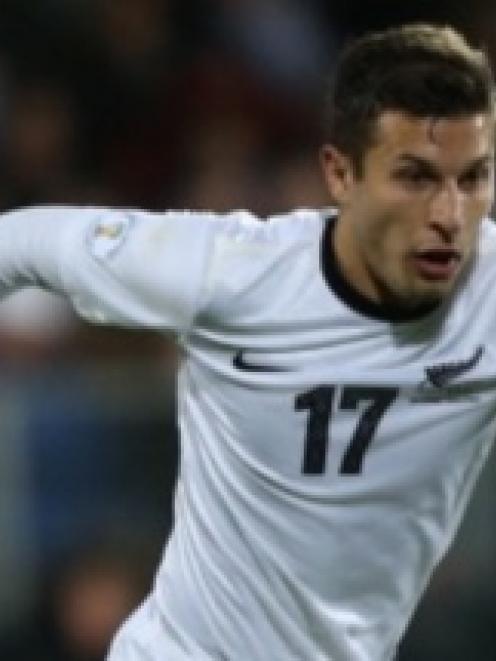 Kosta Barbarouses. Photo Getty
All Whites coach Anthony Hudson described the All Whites' loss to Thailand yesterday as a "teething issue" that comes with having such a young group of players.

After an encouragingly upbeat performance against China on Saturday, the All Whites were frustratingly bad against Thailand and coach Hudson said that greater consistency will come with experience.

"These are going to be the times that we learn from," said Hudson.

"The Uzbekistan game wasn't good, but the response from that and what we took from that gave us a huge boost and we learned from that. Tonight is going to be the same again."

The All Whites dominated possession against the side ranked 34 places below them in the Fifa rankings, but were once again incredibly wasteful in front of goal. Kosta Barbarouses, Chris Wood and Jeremy Brockie all missed easy chances to turn the game and as New Zealand pushed more numbers forward searching for an equaliser, Thailand easily picked them apart.

Marco Rojas was replaced after 30 minutes and Kosta Barbarouses at halftime, but the rest of the side remained largely unchanged, and Hudson must now wonder where exactly it went wrong.

Jacob Gleeson made a string of superb saves, and generally looked a shoo-in for New Zealand's No 2 spot behind Glen Moss before his star faded when he spilled a long-range shot which led to Thailand's second goal.

The back four of Storm Roux, Tommy Smith, Michael Boxall and Deklan Wynne were easily troubled by a pacey Thai attack, while Bill Tuiloma and Tim Payne both failed to nail down the defensive midfield role that Albert Riera plays so well for the Phoenix. The attacking quartet created chances, but will be judged at international level only by their conversion rate, and by that grading criteria all scored fail marks against mediocre opposition.

"We had good periods of possession, we created chances but the disappointing part is that we haven't been able to finish them. And out of possession we have lacked the ability to work hard, press and make life difficult for Thailand. We just lacked consistency."

Hudson still hasn't found the right balance in the middle of the park. Packing the midfield with attack-minded players like Thomas, Barbarouses, Rojas and McGlinchey may prove too bold in big games, because defensively they don't offer enough cover when things aren't going right.

"We have a real good group of players, a lot of them lack experience, but we have to quickly learn and step up to the plate. Leading up to this game we really did put the pressure on, by trying to replicate a must-win game. We all know it's a friendly, but we need to be playing games where the pressure is on and we have to win and we have to get used to that. Maybe for some of the younger lads it was all a bit much for them on the night, but we will get used to it and these are the things we need to address."

Hudson will perhaps only now truly learn the frustrations of coaching the All Whites. After six days together, and now with a lot to work on, Hudson won't work with the squad again for four months.

The All Whites are next targeting a home match in the March window against Asian opposition, an Auckland-based camp in June, an Oceania friendly in August and then the Olympic qualifiers, which will involve the majority of the young squad, in October.