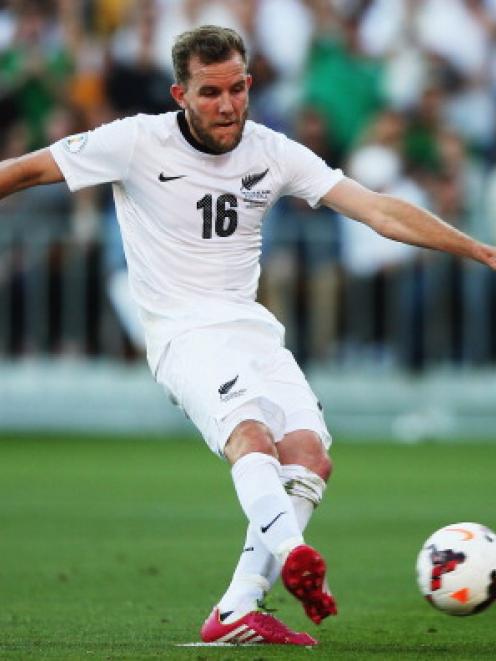 Jeremy Brockie scored a late consolation goal for the All Whites. Photo Getty
Anthony Hudson's tenure in charge of the All Whites got off to a shaky start this morning as New Zealand slumped to a 3-1 loss against Uzbekistan in Tashkent.

The All Whites, who were missing first choice attackers Ryan Thomas, Marco Rojas and Shane Smeltz, were incohesive in possession for large spells of the match and exposed defensively by a slick Uzbekistan attack.

A goal in each half to Odil Akhmedov secured the result for the Asian nation, ranked 47 spots above New Zealand in 51st pace, before captain Server Djeparov added a third in the 76th minute, driving home a cut back from the penalty spot.

New Zealand looked short of match sharpness, and they were. Seven of their starting eleven are currently in pre-season training and only captain Winston Reid and midfielder Chris James are regularly playing 90 minutes for their clubs.

But they have just spent a week together in Doha preparing for the match and tactically, Hudson will be disappointed with just how easy the All Whites were to break down.

Hudson spoke of a national team who would be well organised, clever in possession and very difficult to beat when he was given the job in August, but their performance today scored fail marks in all three boxes.

Their midfield three of Bill Tuiloma, Michael McGlinchey and Chris James failed to provide an adequate defensive shield in front of the back four, and 22-year old debutant Tom Doyle was given a rough ride after getting repeatedly isolated against the pace of Uzbekistan's wingers.

Hudson used a 4-3-3 formation with Wood the focal point of a three-pronged attack, but Tyler Boyd and Kosta Barbarouses were largely anonymous in the wide positions.

The All Whites missed the attacking flair, and comfort in possession of Thomas and Rojas and too often gave the ball away as they were trying to build through midfield.

Wood was a constant nuisance for the Uzbekistan defenders and came close to opening the scoring in the 18th minute, when he snuck in at the far post with a header to force a good save from Ignati Nesterov.

Winston Reid was a towering presence at the back, winning everything in the air and dictating play from the back, but became more and more frustrated as the match went on.

The All Whites often had sufficient numbers in defence but were too often positionally poor. Uzbekistan were afforded too much time and space in and around the New Zealand box and Hudson, a master of analysing video, will have a lot to break down the next time the national team gets into camp.

That is likely to be in November when the All Whites are scheduled to play two games in Asia against Malaysia and China PR.

Hudson said that New Zealand need to get to Uzbekistan's level if they are to qualify for the 2018 World Cup through Asia.

"We didn't come here to do anything else than to get a result," Hudson said.

"We've come here today and we've had a good idea of where we need to be when we come to our qualifiers. Uzbekistan is always a team who are knocking on the door in terms of qualification. We always knew it was going to be a tough game. Tonight has given me a good idea of individual players and we're we are at as a group right now."