Motorcycling: Trials riding not for faint of heart 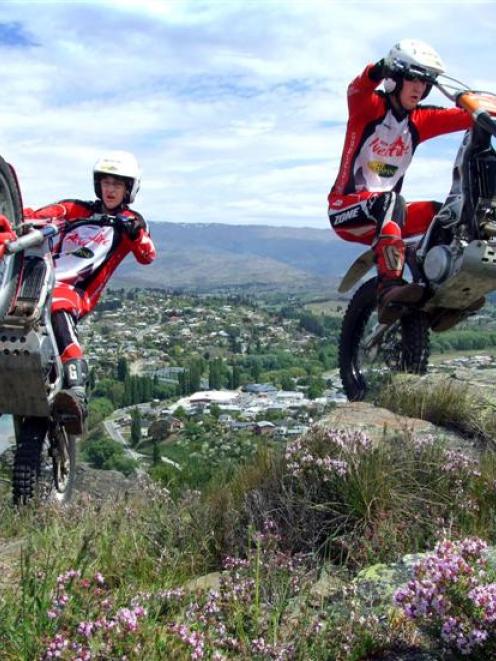 Nelson-based brothers Pete (17) and Nick Oliver (19) scale rocks above Alexandra yesterday in preparation for this weekend's New Zealand Trials Championships. Photo by Craig Baxter.
Life is about balance for Nelson brothers Nick and Peter Oliver, but as top trials riders it can also be about skilful combinations of brake, throttle and clutch to negotiate obstacles, drops and climbs which would cause the faint of heart to stop in their tracks.

The pair were in Alexandra yesterday getting to grips with the terrain ahead of this weekend's three-day national trials championships, which begin this morning.

While they are used to tackling slippery shale, concrete obstacles and river beds around their Wakefield home, their 250cc two-stroke trials bikes "almost get too much traction" on schist rock around Alexandra.

"If you get too much power on during a climb it's easy to loop over backwards," Nick said.

Nick said bouncing the 70kg bikes around on one or two wheels was physically and mentally demanding.

"The trick is to look straight ahead. If you look to the side you're already falling. It's all in your head," he said.

On steeper obstacles or boulders "catchers" are in position to grab bikes if ascents go wrong.

The pair are grateful for support from their father Steve - a five-times New Zealand national trials champion in the 1980s - but his instructions are clear.

"He says, if you're going to fall, land under the bike to save damage," Pete jokes.

During events this weekend riders will cover several laps of set courses, consisting of 40 skills sections, under the five-hour time limit. Riders accrue penalty points for putting feet down, rolling backwards from obstacles, taking the wrong course, or crashing.

About 70 riders, mostly from the North Island, will contest the championships in expert to junior grades.