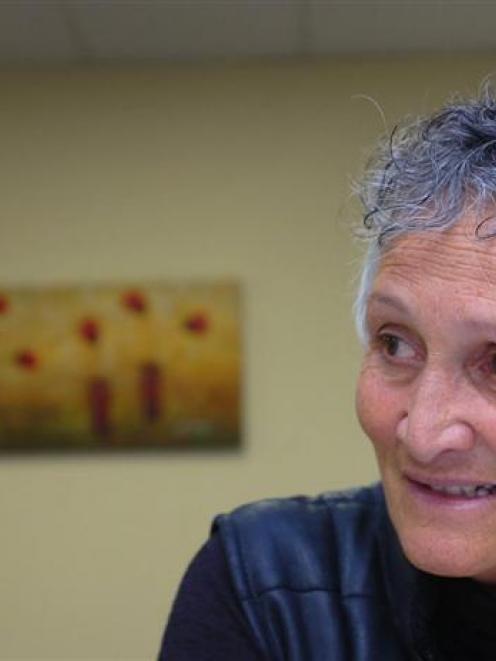 Otago coach Georgie Salter. Photo by Peter McIntosh.
When a coach like Georgie Salter says she is not optimistic about Otago's chances in the national championship you have to take notice.

The 50-something coach has been coaching netball for more than 40 years and was at the helm during the province's greatest hour.

In 1998, she led the Otago Rebels to glory in the inaugural Coca-Cola Cup and Otago also won the Caltex Cup.

The two sides strung together a remarkable run of 22 consecutive victories.

Salter sees some parallels between that great side and the team she will lead when Otago's national championship campaign gets under way against Waikato at the Lion Foundation Arena tonight.

"They remind me of my old Rebels team when they were young and it took them a while to win," Salter said.

"There is a lot of talent in the group and there is good speed and some nous as well. And that's what you need."

That is where the comparisons stop, though.

Otago did not perform well during a pre-season tournament last month and was beaten by Southland and Canterbury.

But there is a good core of younger players who have tasted success on a national level this year.

Otago won the inaugural Lois Muir Challenge - a competition designed to act as a feeder tournament for the ANZ Championship - and also claimed the under-21 title.

You might think that would have given Salter some cause for optimism.

But when asked how Otago will do, her demeanour changes.

The friendly smile gives way to a steely look.

"I'm not that optimistic at all because the Lois Muir Challenge is a huge step down from [nationals]. Realistically, you are looking at a group of younger people with a mixture of older ones in to try and bridge the gap.

"The way Otago played in the pre-season tournament, they played like under-21s and that is not good enough. So we've got some work to do and we understood that, and we've tried to harden up since then.

"We've had two weeks so, hopefully, you are going to see a much tougher, harder group on the court.

"We have to turn it around", but, ultimately, that was up to the players, she added.

"I always think of my job as providing resources and I give as much as I can to them. I can't win the games for them, you have to give them that responsibility. Winning is in the girls' hands, developing them is in my hands."

Salter started coaching netball when she was just 12 years old and it has been a big part of her life.

She made three unsuccessful bids to become the Silver Ferns coach in 1997, 1999 and 2002 and was disappointed not to get an opportunity.

But she worked on the Hillary Commission and found it to be a very gratifying experience.

"When I think about all the things I've done, that was really tremendous. I was really lucky to work under the likes of Wilson Whineray and Brian Lochore. I think I got far more out of that than I would have coaching the Silver Ferns."

Otago has plenty of experience in the midcourt with former Silver Fern Debbie White and the busy Phillipa Finch.

It is an area of strength for Otago with the likes of Camilla Lees and Sam Durie-Aranga also competing for starting spots.

Otago lost defender Katrina Grant's services to the Silver Ferns but with New Zealand under-21 defenders Hannah Broederlow, Jess Moulds and Jaimee Power in the side the province will be well-served.

Otago finished third last season and will be hoping for a top four finish.

Canterbury has reason to feel confident with a good core of Tactix players, and Waikato, Western, Southland and Wellington look useful.

The rest will make up the numbers.