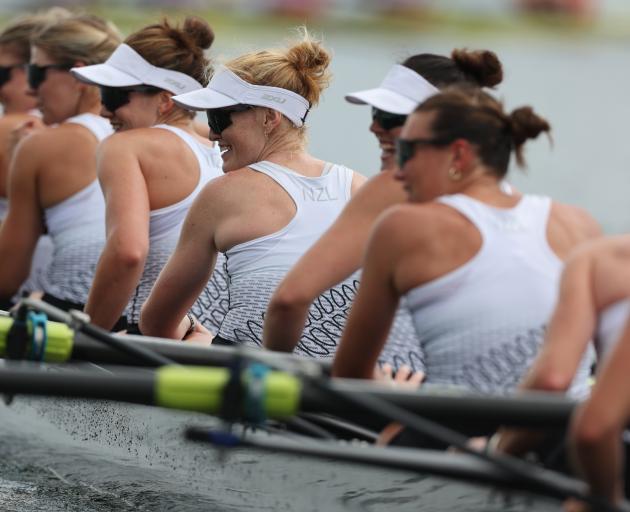 It was all smiles for the women's eight after they claimed a silver medal in Tokyo. Photo: Getty Images
The New Zealand women's eight have claimed their first Olympic medal after being upset for gold by Canada.

Hot on Emma Twigg's oars following her redemption gold in the single sculls on the final day at Tokyo's Sea Forest Waterway, the New Zealand women's eight trailed the Canadians from start to finish, despite making up ground over the final 500 metres in a desperate late push to finish 0.91 seconds back in a time of 6.00.04.

New Zealand were 1.7 seconds back at the halfway mark in third, behind Canada and Australia, but dug in over the final 1000 metres to claim silver. China finished third.

Five years ago, New Zealand sent a women's eight to the Olympics for the first time in Rio and the boat finished an agonising fourth - 1.38 seconds outside the bronze medal.

The New Zealand women's eight also claimed a dominant win at the 2019 world championships – the last time all the world's top crews met before the Covid-19 pandemic.

While they could not match Canada on this pinnacle occasion, the eight continued the theme for New Zealand rowing of the women leading the way at these Games, with four female boats claiming medals, including two golds and two silvers.

One day after setting a world record and clinching gold in the women's pair Prendergast and Gowler, who will savour the achievement alongside sister Jackie, made history by becoming the first Kiwi rowers to win two medals at one Olympics.

Prendergast said the silver medal meant just as much as her gold.

"I'm so proud and I feel like I'm just as stoked with this race as I was yesterday, like it's a silver medal but it was incredible and it was so much fun and I think we've just been a really good bunch together and it's just so special to come away with a silver medal that honestly feels like a gold to me," she told Sky Sport after the race.

Fellow crew member Spoors emphasised just how much time and effort had gone into their Olympic campaign and was proud that it all paid off.

"Yeah I mean it has been such a long project and we've been training so hard for three years to put ourselves in a position where we could end up on the podium and I think today I'm just most proud of the way we stayed composed and stayed together so that we could just put out the best race that we could possibly have."

The one male on the crew, cox Shepherd, told the television broadcast that the crew had put in maximum effort for their silver medal.

"Asking for everything and the girls gave it and that's the best we could have done today and it was amazing, we left it all out there, it was so good.

"To be honest, I just had my head forward, I was staring at Grace, I was doing all I can. We were putting it all out there and whatever we were going to come across the line at, we were going to be happy and it was second and I'm bloody stoked for all of us."