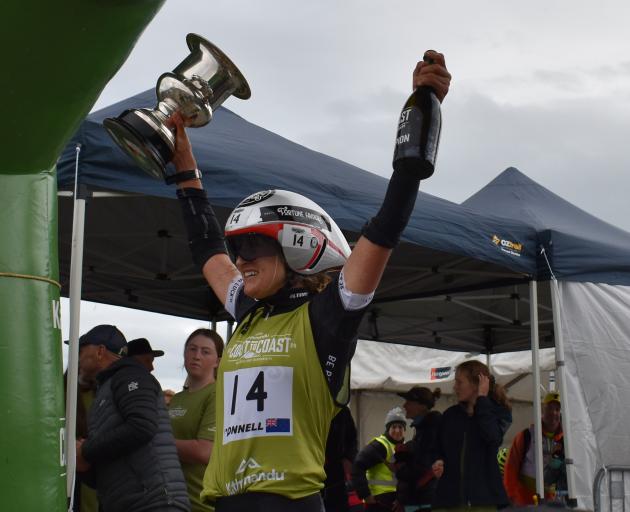 In three previous attempts the Whakatane pharmacist had finished fourth on each occasion.

But it was fourth time lucky on Saturday, as an emotional O’Donnell lifted the world championship trophy at New Brighton Beach to loud applause.

It was a mixed day for her.

"I never really have a good run off the beach so I was pretty stoked to make that top women’s bunch," she said.

"Earlier in the morning before we started, I was so nervous I made myself sick, so on that last bike I couldn’t get any food down me. But I ate heaps on the boat though, so I though I’ll just keep going to the end."

Such were her nerves and unsettled stomach, O’Donnell’s initial thoughts were that she would be happy to settle for another fourth place, or at best a place on the podium.

More so after what she termed a "pretty average run" on the 33km alpine stage.

Such was her disappointment with her alpine run she gave thoughts of just going into survival mode to finish the race in one piece. But if she thought things were going badly for her after crossing the great divide, she would quickly discover she was not alone.

Heading out on the river stage she passed defending champion Simone Maier who appeared in some difficulty. Then, shortly afterwards, she noticed race leader Alison Wilson had been blown on to rocks by the strong wind.

Conditions on the water were pretty rough and that a combination of high and rapid water along with a strong wind suited her.

Realising she was in the lead, O’Donnell kept taking nervous glances back and noticed Wilson was back on the water and chasing her.

"Every other year I’ve lost about three placings on that bike so I was really stoked to hold my placing from the paddle. I was just hoping for a year that I would be happy with my race. And man, definitely happy with my race this year."