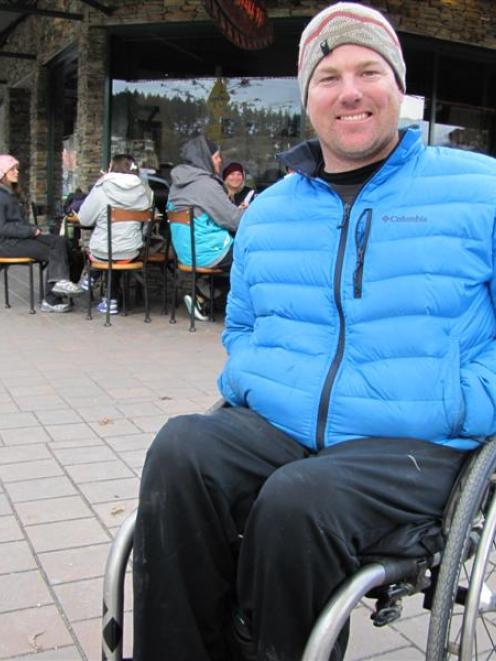 The Wanaka adventure sports enthusiast has risen rapidly through the ranks of adaptive skiing since he became a paraplegic following a paragliding accident on Treble Cone in April 2008.

Now, Smith is ready to represent New Zealand in the adaptive giant slalom at Coronet Peak on Tuesday and the super G at Mt Hutt next Saturday.

The married father of one was a resource management consultant but now works in importing, distribution and website management from home.

Smith is also a member of the New Zealand adaptive development ski team and earlier this year he spent a month training and competing in International Paralympic Committee skiing events in the United States.

International events attract larger fields of about 30 athletes, and Smith notched up creditable top-10 finishes in the Huntsman's Cup at Park City and the Wells Fargo Cup at Winter Park.

He was a member of a third-placed New Zealand team in a corporate competition and finished in 13th place at a World Disabled Invitation meet.

"I did some training building up to the New Zealand nationals last year and competed in the nationals at Coronet Peak. Those were the first big races that I did.

"The fields vary quite a bit. That is the challenge, really, to go and ski against strong sit skiers in the United States. That is the beauty [of international competition]. They attract strong fields that we don't often get."

The Winter Games adaptive alpine fields also feature three sit skiers from the United Kingdom, three from the US and two from Korea.

Among them are Timothy Parr, of Britain, who is ranked by the IPC among the top 50 disabled skiers in the world, and US war veteran Heath Calhoun, who raced at the 2010 Paralympics.

Smith said he felt slightly daunted by the opposition and also felt like that when competing in the US earlier this year.

"But it is a small family in the sit-ski fraternity around the world. It is pretty friendly so it is not too daunting," he said.

Technology is never far from an adaptive skier's thoughts and since Smith obtained his Praschberger two years ago, more changes have been made to the equipment.

Now, the Japanese-designed sit ski, the Nissin, seems to be the "ants pants", particularly after athletes competed strongly in them at the Vancouver Paralympics last year, Smith said.

While Smith is considering an upgrade, it was more important that Snow Sports New Zealand obtained resources so more people could try adaptive snow sports, he said.

"Certainly, we are very short on equipment in New Zealand. We've got two Nissin sit skies in New Zealand, and we are now helping phase new skiers into these. We have got one for Wanaka and one for New Plymouth," he said.

The United Kingdom adaptive team had recently helped out the Kiwis by providing a sit ski for Queenstown schoolgirl Mia O'Keefe to use at Cardrona Alpine Resort's adaptive programme, he said.