Georgia one of genuine big improvers 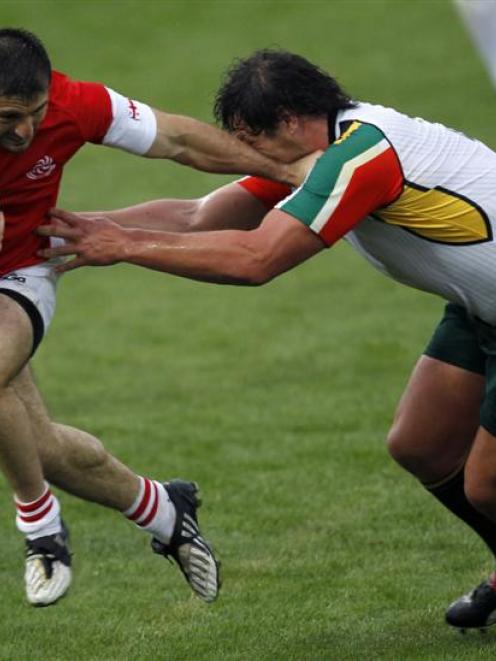 It would be too easy and almost certainly foolish to label Georgia as just another minnow clogging up the World Cup.

Sure, there is no way the Eastern Europeans are going to stage some sort of miracle run to the semifinals.

But equally, they are not expected to be whipped by 100 points in the pool stages.

Georgia is shaping as one of the genuine big improvers of world rugby. Given time and resources, the former Soviet state may soon join the likes of Scotland, Wales and the Pacific Island nations in a sort of second tier of the international game.

Four years ago, while everyone was talking about Argentina's rise and Australia's powderpuff scrum and the All Blacks' seemingly inevitable charge to victory, the Georgians were making a quiet statement.

They smashed Namibia 30-0, competed manfully with Argentina - the Pumas led just 6-3 at halftime - and then nearly caused an extraordinary upset against Ireland, only losing 14-10.

Since 2007, player numbers have doubled in Georgia and two new rugby grounds have been built.

The Lelos - the nickname comes from lelo burti, the name of a traditional sport with links to rugby - have also seen handfuls of their best players gain contracts in France.

Breeding big, powerful tight forwards, Georgia probably will not play the most exciting brand of rugby but it should be able to compete physically with most teams.

Coach Richie Dixon, the former Scotland coach and IRB development officer, is not expecting miracles yet.

"I think this World Cup may have come a year too early for us," Dixon told AFP.

"Georgia has always played a very forward-dominated game and we are trying to adapt that to bring the backs into the game. We want to find the balance between warrior and artist.

"This year we will do our best but I really believe that the way things are going, in four years' time Georgia will be looking seriously at getting out of the group stage."

Georgia will view its game against Romania as its best chance for a win, although it will also target Scotland.

Georgia: the facts
General
Capital: Tbilisi
Population: 4.6 million
Facts
• People from Georgia (they call it Jowja, in their southern drawl) like peaches, the bible, Gone With The Wind and slavery . . . oh, hang on.
• Georgia, the country, is an ancient sovereign state that gained independence from Russia in 1991.
• Joseph Stalin was a Georgian. Singer Katie Melua was born in Georgia.
Temuri Ketsbaia and Georgi Kinkladze were Georgian footballers who played in the English Premier League.
Zaza Pachulia plays in the NBA with the Atlanta Hawks - he is a Georgian in Georgia, sorry, Jowja.
Rugby
Coach: Richie Dixon.
Captain: Irakli Abuseridze.
Previous World Cups: Pool stage in 2003 and 2007.
Games: v Scotland, Invercargill, September 14; v England, Dunedin, September 18; v Romania, Palmerston North, September 28; v Argentina, Palmerston North, October 2.
Players to watch
Mamuka Gorgodze: Lock or loose forward who plays in France, where he was voted best foreign player last season. Has the spectacular nickname of Gorgodzilla.
Malkhaz Urjukashvili: The winger or fullback is playing in his third World Cup.
Davit Kubriashvili: One of about 500 foreign props playing in France.