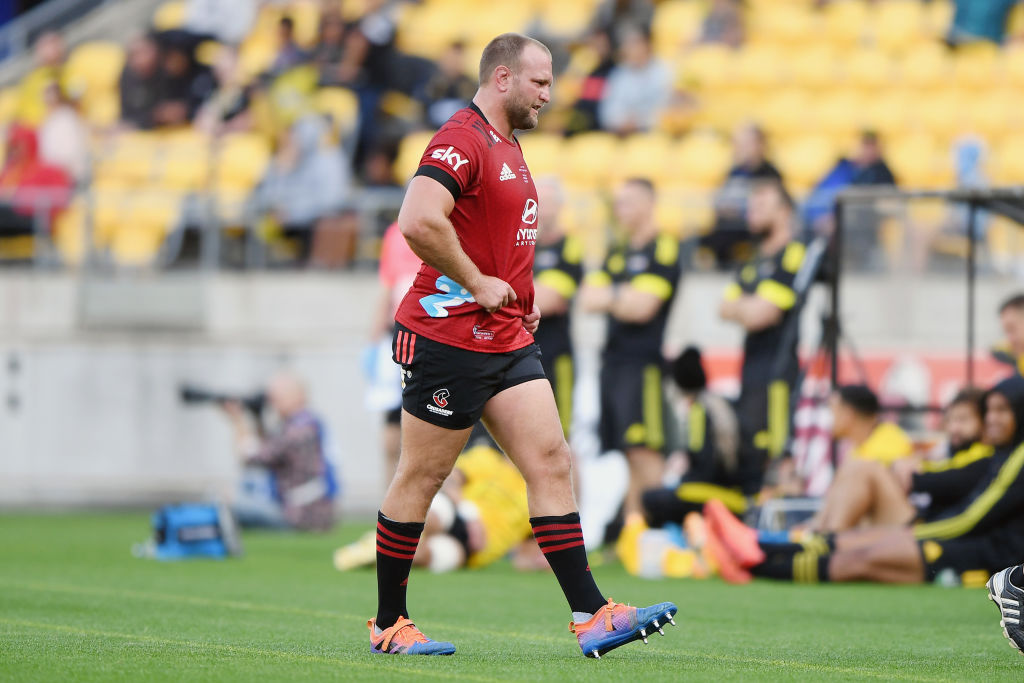 Joe Moody leaves the field with an injury during the match between the Crusaders and the Hurricanes in Wellington on April 11. Photo: Getty
All Blacks and Crusaders prop Joe Moody is set to undergo surgery and faces a lengthy stint on the sidelines.

Moody was taken from the field with plantar fasciitis in his left foot 26 minutes into the Crusaders' win over the Hurricanes on April 11, in his 100th game of Super Rugby.

While the extent of the injury was unclear following the game, Crusaders coach Scott Robertson has now confirmed Moody will be out for four to five months.

"We really feel for him," Robertson added.

The injury is the latest setback for Moody, who, ahead of making his 100th appearance in the competition, had noted the milestone took him longer to get to than some of his teammates because of the injuries he had sustained throughout his career.

In his absence, George Bower has been starting at loosehead prop, and Robertson praised the job the young prop had been doing, particularly in their 29-6 win over the Blues in Christchurch on Sunday.

"I'm really proud of George Bower, he's really stuck in there. Big, heavy Karl (Tu'inukuafe) was landing on Mikey (Alaalatoa) and we fought back into it to win some great scrum penalties. It was a great old battle in the scrum. A tough night for the ref, but we adapted well."

The Crusaders put an end to the Blues' chances of making the Super Rugby Aotearoa final in the match, while booking a home final against the Chiefs. The Blues needed to take at least a bonus point out of the match, but we unable to end within seven points of the Crusaders – failing to score a try in the match and missing a number of penalty goal attempts.

The Crusaders will have the bye next weekend before hosting the final on May 8, while the Chiefs will meet the Blues in Auckland and the Highlanders meet the Hurricanes in Wellington is a round of matches with nothing on the line but pride.

The Blues, Highlanders and Hurricanes will now turn their attention to righting some errors ahead of Super Rugby transtasman, while the Chiefs will begin their preparations for the final.