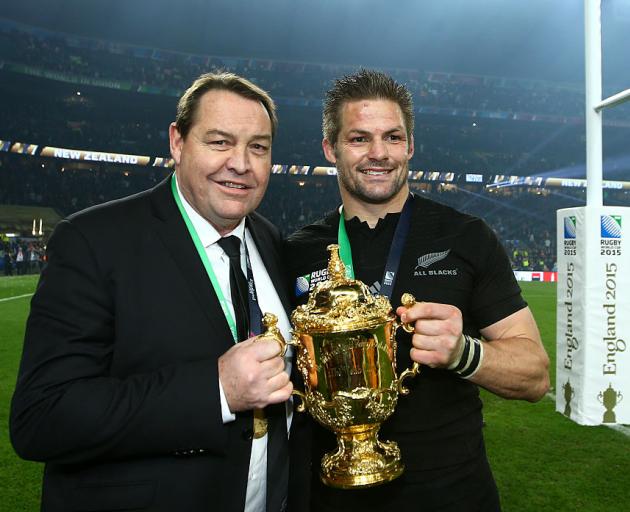 Sir Steve Hansen and Richie McCaw hold the Webb Ellis Trophy. Photo: Getty Images
Sir Steve Hansen was honoured with a knighthood in the New Year Honours announced today following a reign as the most successful All Blacks coach.

But it raises the question about the All Blacks' most successful player - Richie McCaw. Where is his knighthood?

Following the successful 2015 Rugby World Cup campaign, McCaw became the youngest person to be appointed member of the Order of New Zealand, announced in the 2015 New Year Honours list.

Membership is limited to a maximum of 20 living persons at one time, making it a more prestigious honour than a knighthood.

However, at the time McCaw knocked back the chance for a knighthood as well, as he did four years earlier suggesting he would consider it at a later date.

In 2011, Prime Minister John Key revealed he offered a knighthood to McCaw after he led the All Blacks to the World Cup title on home soil, but it was turned down.

"In the end, the conclusion that he drew was that he would love to take it but now wasn't the right time,'' Key told RadioSport.

Richie McCaw. Photo: Getty Images
"He made the call that he's still in his playing career and it didn't feel quite right for him, that day where he's no longer on the pitch may be the right time for him.''

Key said there was no formal offer made in the end.

"We didn't formally get to offer it to him in the sense that we knew if we offered it he wouldn't take it, but had he shown indication that he would've then we certainly would've offered it to him, I certainly wanted him to take it.''

Four years later McCaw captained the All Blacks to a successful defence of the World Cup title, becoming the first side to do so.

McCaw finished his career having played 148 tests, the most by any player in the history of the game, and won three World Rugby player of the year awards.

"I'm still pretty young, so to have a title [knighthood] like that, I don't know whether that's the right thing just yet," McCaw told TVNZ after the 2015 tournament.

But at the investiture ceremony held at Government House the following year where he officially became a member of the Order of New Zealand, McCaw seemed to have cooled to the idea of a knighthood and turned down the option again.

McCaw said there were no regrets of not becoming "Sir Richie" and receiving an Order of New Zealand "sat more comfortably" with him.

"You can't get any bigger than this," he said.

"It's great people get recognised for these things, at the end of the day you're an ordinary Kiwi really," McCaw said in 2016.

"People expect you to behave like that ... it's one the things I've always been strong on."

On becoming the youngest New Zealander to receive the Order of New Zealand, McCaw added it was a "little embarrassing".

"I have had friends point that out to me," he laughed.

The call it seems remains up to McCaw.

Joining Hansen in the accolades today was former New Zealand Rugby CEO Steve Tew who became an Officer of the New Zealand Order of Merit.