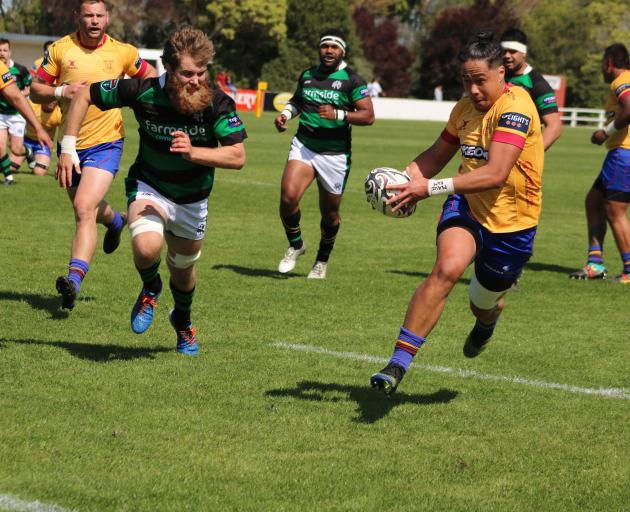 North Otago has fallen to its closest rival, losing 33-27 to in-form South Canterbury which kept alive its unbeaten run in the Heartland Championship.

It is a game North Otago will rue, having led by seven points at one stage in front of a home crowd in Oamaru.

But there were still plenty of positives for the men in gold.

A lacklustre performance against Poverty Bay last week was put to bed, as North Otago played with more intensity against South Canterbury, was quicker in all aspects of the game — especially at the breakdown — and recycled the ball at speed.

An early penalty let South Canterbury get a 3-0 lead, but North Otago returned fire through a penalty of its own to level scores.

In a piece of magic, Old Golds fullback Levi Emery’s dazzling foot work enabled him to break from 60m out, then he linked with veteran winger Lemi Masoe.

From there, the Old Golds moved quickly, shifting the ball wide and prop Kelepi Funaki held the ball up, drawing in a couple of defenders, before putting winger Mataroa Maui in for a try.

It gave North Otago an 8-3 lead and pumped the players up, as they went on to force several South Canterbury turnovers.

The Old Golds had further scoring opportunities through its backs breaking South Canterbury’s defence, but were unable to execute and were guilty of throwing the miracle ball.

However after stringing phases together, North Otago forced a penalty which Abel Magalogo scored from out in front to extend the lead.

In a stroke of brilliance at a South Canterbury line-out, hooker Junior Faavae gave the short ball to halfback William Wright, who ran through unscathed down the blindside to score South Canterbury’s first try of the day. It meant the visitors trailed 11-8 at the half.

North Otago strung together plenty of phases, and was efficient at the pick-and-go before Magalogo jumped the South Canterbury defence to score in the corner.

From there, North Otago played smartly, taking a penalty and pushing out to the biggest lead of the game, 27-20.

South Canterbury, however, was not about to let North Otago run away with the game and Sam Briggs closed the scoreline with a penalty.

North Otago held its defensive line well, but South Canterbury had better game management, holding the ball, forcing North Otago to slip off tackles and allowing Luke Glen to score for the visitors.

Glen was yellow-carded shortly after for a deliberate knock on, but North Otago was unable to make anything from it.

South Canterbury worked the ball, used its experience and created a penalty opportunity, which Briggs grabbed to seal the game 33-27.

Lock Sean Jansen was a strong line-out target, mobile with the ball, and put in some hard hits in his first North Otago game, and loose forward Toni Taufa was massive over the ball at the break down.