Rugby: Blues defence proves too much for Highlanders 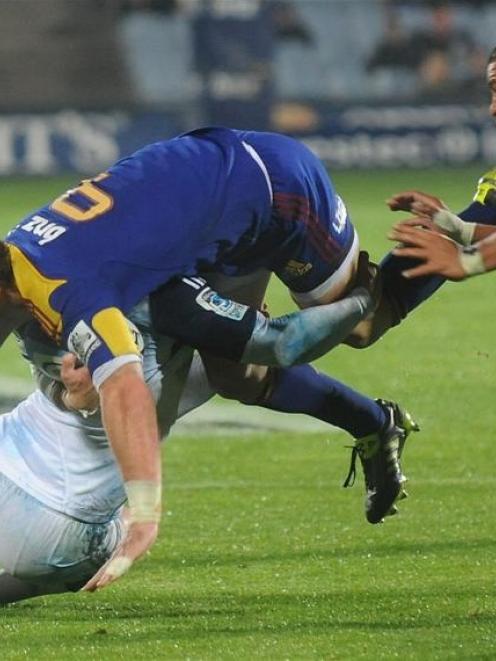 Highlanders halfback Jimmy Cowan is tackled by a Blues defender (obscured) while Blues hooker Keven Mealamu is in support. Photo by Peter McIntosh.
In a tussle which went right down to the wire, the Blues won out over the Highlanders at Carisbrook last night.

The Blues won 15-10 in a match where the Highlanders just failed to finish ahead of a Blues side which won the game through its tough defence. In a game where referee Chris Pollock won no new friends in the South, the Blues hung on to the ball for more than 25 phases to wind down the clock right at the end.

The Blues did not score a try, and got all their points through Luke McAlister's boot.

The home team looked the more lively on attack, scored the only try of the game, but could not find a way through a determined Blues defence when it needed to.

The Highlanders quickened up the game in the second half and looked to be timing their run home well but just could not find the clinical finish.

The Blues were right on the line of defence, offside on occasions, but Pollock let them away with it so they took full advantage.

Ben Smith, who moved to fullback early in the match, was absolutely outstanding for the home team, making breaks whenever he got the ball, and beating the first man seemingly at will.

Jamie Mackintosh was a power of strength in the front row, but the Highlanders lacked quick ball when it was needed.

Best for the Blues were halfback Alby Mathewson and centre Jared Payne, while Jerome Kaino got through plenty of work.

The Highlanders made a great start in the second half.

They won a turnover around the halfway mark and replacement back Matt Saunders then sped through a gap to get the side to within 5m of the line.

The Blues conceded a penalty and after a couple of charges at the line the ball went to Robinson who burst through a gap to score by the posts.

He converted to close the gap.

McAlister and Robinson then traded penalties and the match was anyone's with 20 minutes to go.

Right before the break the Blues turned down a kickable penalty to go for a try.

After two minutes of scrummaging, and numerous resets, Blues No 8 Peter Saili detached and was sent backwards by Highlanders halfback Jimmy Cowan.

The Highlanders pounded into the ruck but, in a mystery which would rival Agatha Christie at her best, referee Pollock proceeded to penalise the Highlanders.

And then to put the cherry on top of the Highlanders' misery, Pollock sent lock Jarrad Hoeata to the sin bin, for an offence which even the most strictest headmistress would find hard to fathom.

McAlister kicked the penalty on the halftime break and the Blues went into the break 9-0 up and looking comfortable.

The Blues had all the ball in the opening 15 minutes but only had a Luke McAlister penalty to show for its efforts.

The Highlanders were not helped by the loss of first five-eighth Tony Brown, who limped off after 16 minutes with a knee injury.

That forced a reshuffle of the Highlanders backline and Brown's steadiness in the No 10 jersey was missed.

Slowly, as the half went on, the Highlanders got more ball but marred any attack with inaccuracies. The Blues were rushing up in defence and the home team was really struggling to find any space.

It was an ugly watch for large parts of the first 40 minutes with both sides strong on defence, but too many errors at the wrong time destroyed any chance of continuity.

The Highlanders had a couple of opportunities, one through a great run from Smith, but could not get the ball quickly enough from the breakdown to stretch the Blues defence.