Rugby: Highlanders find it's not easy being green 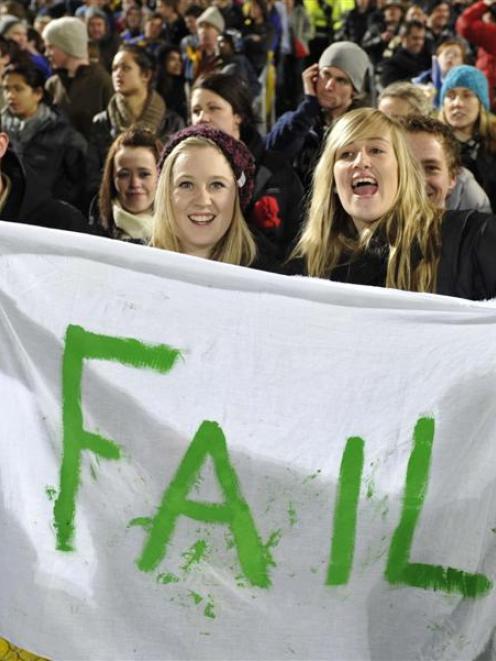 Nicole Batchelar (left) and Emily Kloogh give the Highlanders their thoughts on the change to green jerseys on the Carisbrook terraces last night. Photo by Craig Baxter.
Green in more ways than one. The lack of basic rugby brains came back to haunt the Highlanders last night as they lost 21-14 to the Force at Carisbrook, and almost certainly kissed goodbye to their playoff chances.

The side, in its new green playing strip, made plainly dumb decisions throughout the second half and did not deserve to win.

Its scrum went backwards all night, its lineout was not accurate enough and it conceded turnovers at the wrong time.

It never made the most of chances when they came along and seemed to forget that to score tries you need to have the ball. It was needlessly kicked away to give the Force the winning try and the Highlanders never had the ball in the critical final minutes as its opponent piled on to attack.

It was a sad way to end the Highlanders' tenancy at Carisbrook but the players just left their energy in the sheds at the break.

The home team had a bucketful of chances in the first 50 minutes but had just the one try to show for it. In the end that was the difference between the teams.

It was a poor game at times, and the new green jerseys became irrelevant as the Highlanders drifted out of the game.

When the highlight of the game is seeing what colour the home side is wearing then you know no classic was delivered at Carisbrook last night.

The Force clinched the game with 10 minutes to go when it grabbed an ill-directed High-landers chip kick and moved the ball to winger David Smith, who was far too quick for the forwards fanning out in defence.

The Force had earlier got it first try after 65 minutes when, after more than a dozen phases, Smith crossed when the Highlanders ran out of defenders.

The Highlanders were their own worst enemies as they simply could not hold on to the ball for long enough.

Best for the home side was No 8 Nasi Manu, while second five-eighth Shaun Treeby ran well.

David Pocock stood out for the Force, as did captain Nathan Sharpe.

The home side was robbed of a try five minutes into the second half when Siale Piutau sped down the left wing and moved the ball to Manu, who dived over the line, but it was wrongly called that the winger had spilt the ball forward.

The Highlanders then spent the next few minutes of the second half hard on attack but had nothing to show for it.

Their only try came midway through the opening period and gave the players confidence.

The Force threw the ball in hard on its own line and it was probably the candidate for worst throw of the season.

It was picked up by the Highlanders who quickly moved the ball wide. Fullback Ben Smith spied the gap from 5m out and just could not be stopped.

Lima Sopoaga could not add the conversion but he kicked a penalty from straight out in front five minutes later to give the side a 14-3 lead with nearly half an hour gone.

They went very close five minutes later with Thomson guilty of going too high when he went for the line and was pushed across out across the sideline in the dead ball area.

Those were costly misses at an opportune time as Force first five-eighth James Stannard was sitting on the sideline after being given a yellow card for an early tackle.

The Highlanders had started well and went close a couple of times but did not hold on to the ball at the vital time.

The Force then rolled up the field and on the back of four penalties the Australians grabbed the first points with a Stannard penalty.

But the Highlanders swung back into attack and Sopoaga helped himself to two quick penalties, the second an excellent effort from 45m out on the angle.